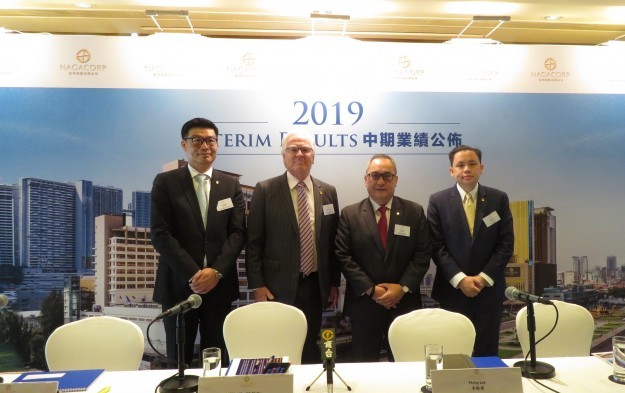 Hong Kong-listed casino operator NagaCorp Ltd says business performance at its NagaWorld Complex in the Cambodian capital of Phnom Penh will not be hurt by the decision of Macau junket investor Suncity Group to stop proxy betting at overseas locations.

“For NagaWorld, actually we don’t offer any online gaming,” NagaCorp’s chief operating officer and chief marketing officer Mike Ngai (first from left) said at a press conference (pictured) on Wednesday in Hong Kong, when asked by reporters on the topic. “In terms of the effect of Suncity’s stop on proxy betting, basically we don’t have any material exposure to that. So, in terms of revenue contribution, we will not be affected.”

The conference followed the company’s results announcement for the first half of 2019 on Tuesday.

NagaCorp said on Tuesday its VIP gaming segment contributed about 73 percent of revenue, or US$649.9 million, during the first half of this year.

Suncity Group – said by investment analysts to be one of the largest VIP gambling organisers in Macau – officially opened VIP facilities at Naga 2 in March 2018. Earlier this year, it moved its operation to a bigger space in Naga 2, accommodating more tables, according to information by NagaCorp.

Earlier this month, Chinese state-backed media alleged that Suncity Group had been involved in operating an online gaming platform for play outside Macau. Suncity Group publicly denied the online gaming allegations, adding that even if certain “products” were “legally allowed to operate in other countries and regions, the company will not adopt them if the laws of Macau do not allow it”.

In an email to GGRAsia on Tuesday, Suncity Group said: “After responding to the [earlier] incident [via the] July 13 press conference, the company has stopped overseas telebetting as promised. Other businesses have been operating as usual and have not been affected.”

Proxy betting was banned by the Macau government in 2016, and has since become popular in the Philippine casino market, according to a note issued by Goldman Sachs (Asia) LLC last week. Both Goldman Sachs and Chinese investment bank China International Capital Corp (CICC) have remarked that the VIP gaming earnings of casinos in the Philippines could suffer if proxy betting were no longer pursued in that market.

NagaCorp’s Mr Lee added that the Hong Kong-listed firm was also engaged in direct VIP operations at NagaWorld. “It is a market we would like to grow, but we’re very careful about how to do it,” he said.

“This is a target segment for us but… we want to be very conservative in direct VIP gaming,” Mr Lee added. “So [VIP gaming business at NagaWorld] is still very much driven by junkets.”

In Wednesday’s press conference, NagaCorp’s chairman Tim McNally (second from left) said a bill to regulate the casino industry in Cambodia was expected to be ready this year. The Cambodian government has been in the process of amending its gaming laws since at least 2014, in a bid to draw major casino operators to that country.

Mr McNally added that – based on discussions with officials from the government of Cambodia – he expected the tax regime for gaming establishments in that country to remain more competitive than in other jurisdictions in the Asia-Pacific region. He added such rate could be lower than 10 percent of overall gross gaming revenue.

“We anticipate the taxation will be on the lower end when you compared it to, say, Macau, Singapore, some of the other jurisdictions,” he said. “We are optimistic that we will have a very competitive tax rate, and that we will be able to continue to operate successfully within that tax rate.”

NagaCorp reported on Tuesday net profit of about US$245.1 million for the first six months of 2019, a 36.1-percent increase over the corresponding period last year. The company identified political stability in Cambodia, an improving operating environment, business growth at Naga 2, tourism and the expansion of its VIP gaming business among the reasons for its half-year results.

A Macau court was offered evidence on Monday, including of recordings from police-wiretapped telephone conversation, that the prosecution says proves the direct involvement of Levo Chan Weng Lin... END_OF_DOCUMENT_TOKEN_TO_BE_REPLACED