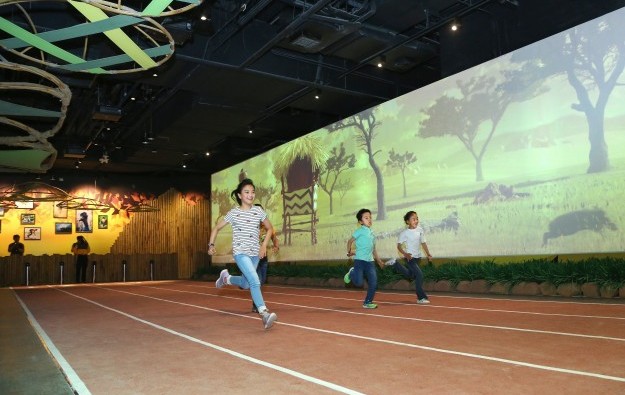 National Geographic Ultimate Explorer Hengqin, a new indoor entertainment zone geared towards family visitors, was launched on Monday on Hengqin island next door to Macau. The attraction is part of the CNY5.45-billion (US$792 million) first phase of Novotown, a major development focused on non-gaming tourism.

Hengqin is one of the pieces of mainland China territory closest to Macau’s gambling hub. Hong Kong’s Lai Sun Group is the lead developer of the Novotown scheme.

An indoor theme park called Lionsgate Entertainment World was launched at Novotown on July 31. It features attractions based on some of Hollywood’s most successful film franchises.

According to a press release issued on Monday on behalf of National Geographic Ultimate Explorer Hengqin, the newly-launched entertainment centre has an area of 4,500 square metres (14,764 sq feet) and offers about “15 experiences” geared towards children aged six to 12 and their families. The attractions – under a licence agreement with National Geographic Partners LLC – are based on themes that explore space, nature and science.

The launch of the National Geographic Ultimate Explorer had the endorsement from Hengqin officials. Gu Guangxin, deputy director of the Administrative Committee of Hengqin New Area, said at the launch: “By positioning Hengqin as the epicentre of family-friendly fun, we are providing travellers with more choices than ever, while also helping to foster the continued diversification of Macau’s economy.”

In April, Cheng Wai Tong, deputy director of the Macao Government Tourism Office, told Macau media that he believed Hengqin’s goal of developing as a tourism island could complement Macau’s tourism offer, namely the latter’s casino resorts and historical heritage sites. That month, it had been announced that China’s State Council had approved a plan to make Hengqin an “island for international leisure and tourism”.

Macau’s Court of Final Appeal announced on Monday sentences in relation to a total of nine cases concerning debt claims involving junket operators based at local casinos. In all the cases, the... END_OF_DOCUMENT_TOKEN_TO_BE_REPLACED