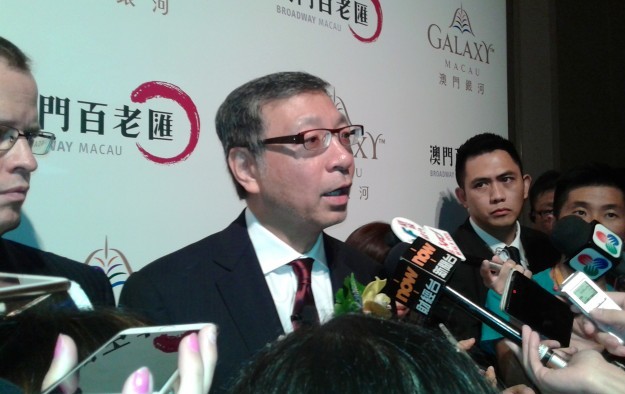 The vice chairman of Galaxy Entertainment Group Ltd was on Wednesday asked the multimillion dollar question of whether he was happy with his firm’s allocation of 150 new-to-market gaming tables for its Galaxy Macau Phase 2 resort opening that day.

“I will never say there are too many tables,” said Francis Lui Yiu Tung (pictured), at a press conference to mark the launch, hastily adding in a reference to the Macau government – which decides these things against the backdrop of a market wide gaming table cap – “I think 150 is very acceptable”.

The firm has said in filings that the HKD19.6 billion (US$2.5 billion) property has capacity for 500 gaming tables, but the Macau government didn’t confirm how many it was getting until only days before Galaxy Macau Phase 2 opened.

Moments earlier, the casino executive had indicated – without directly referring to the corruption crackdown in neighbouring mainland China, from where Macau as a whole draws many of its gambling patrons – that the Macau story was no longer purely about how many tables an operator had.

“I think the market compared to the last 10 years is going through a lot of changes,” he explained. “It’s not just about the number of gaming tables. That alone doesn’t mean you will be successful and make a profit.”

Earlier his father Lui Che Woo, chairman and founder of the company, had described the family’s casino business as “patriotic” and committed to Macau’s economic diversification – a stated policy aim of both the territory’s government and Beijing.

“Galaxy Entertainment is a patriotic company and we are aligned with the central government’s aim of making Macau a world centre of tourism and leisure to contribute to Macau’s long-term growth,” said the chairman.

Francis Lui did however indicate a difference of opinion between some Macau officials and the city’s six casino operators on the topic of a proposed total ban on casino smoking likely to happen next year. As presently envisaged, it would include abolition of enclosed and specially ventilated smoking lounges currently to be found on mass market floors.

The executive however warned that tourism was “very important”, and preventing some patrons from smoking meant “there will be huge losses”.

“We need to listen more,” stated Francis Lui. He added there were “many options” short of a complete ban.

Francis Lui added that the six local operators were “working together” to propose alternatives to a complete ban, although he didn’t specify what they were.

During the press conference, the company chairman revealed that Galaxy Entertainment’s RMB10 billion (US$1.6 billion) non-gaming investment on the mainland’s Hengqin Island next door to Macau would be for “sport and leisure”. Previously there had been speculation in the media that it would include a golf resort.

On the sidelines of the press conference, Francis Lui said that golf would be “nice” as a future option, without confirming any details for Hengqin. He did say however that a timetable for opening would need to be aligned with local infrastructure development, hinting that no solid timetable for opening was yet available to share in public.

The newly renovated neighbouring casino hotel Broadway at Galaxy Macau, also opening on Wednesday, includes a 3,000-seat theatre. The complex will have a mass-market appeal, with live performances, bands, street entertainers and hawker-style vendors, according to the firm.

The imminent return of package tours from mainland China will not only help boost Macau’s tourism businesses, but is also expected to help casinos gain more foot traffic in their mass gaming... END_OF_DOCUMENT_TOKEN_TO_BE_REPLACED