New Aruze craps game could be sleeper hit in Asia 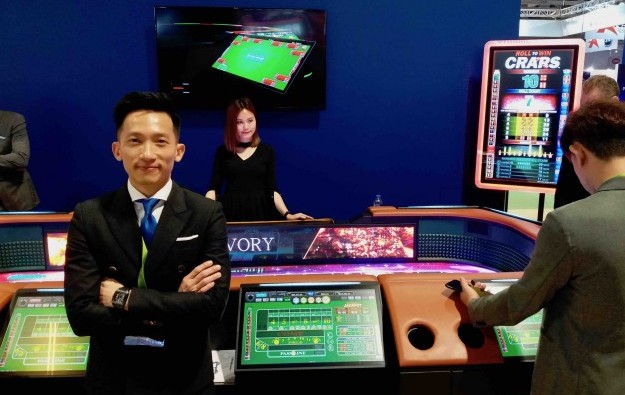 A prototype electronic table game not initially earmarked for Asian markets could prove to be a new regional hit for the Aruze brand.

That is according to Kevin Lee, deputy general manager of Aruze Gaming Macau Ltd, in comments to GGRAsia on day two of the Global Gaming Expo (G2E) Asia 2019 casino industry trade show in Macau.

Initially it was “not targeted for Asia, but we see potential in it,” Mr Lee told GGRAsia at the company’s stand at the event inside the Venetian Macao casino resort.

The Philippines was likely to be a fruitful market for the final product, as they have “similar players” as the United States market, noted the Aruze manager.

He explained part of the business proposition of the product both from a player’s perspective and from a casino operator’s viewpoint.

“In traditional craps…  there are usually three dealers to calculate and verify whether the payout is correct.

He added: “We completely automated that part. So payout is all automated, and you [the player] can withdraw your payout via ticket.”

The playing surface is built on an LED panel, which can be branded and used as a collateral in marketing by casino venues.

Roll to Win Craps also features a tableside display to show the results of the previous games, including ‘trends’ – a favourite concept with many Asian players.

In live-dealer craps, “you don’t have that,” notes Mr Lee.

He noted Aruze had seen sales growth in the Philippines in an older Aruze product, “Shoot to Win Craps” which he described as a product “very similar” in play style to the traditional Asian dice game sic bo.

“Electronic table games we believe in the future will take over,” from live-dealer tables, said the Aruze manager.

Factors in that included convenience for the players, and a reduction in overhead costs for the casinos.

“That’s how Japan is. Everything is automated,” where possible, noted Mr Lee.

At G2E Asia, the Aruze brand was also displaying its “Fu Lai Cai Lai” progressive link slot series – which translates from the pinyin Chinese as “More wealth to come”. It is being presented on a new cabinet, the Muso Triple-27.

The product manages to combine payout volatility in the base game, with the large-size jackpots associated with progressive-style machines.

“Each game has its own feature. The games have a very strong multiplier feature, so they are exciting for players that like high volatility” games, he stated.

The product is already in the Philippines and in some large casino resorts in Macau, he told GGRAsia.

Macau’s six casino operators have welcomed “the timely unveiling” of key aspects of a bill proposing a new regulatory system for gaming that will shape how the industry looks for years ahead.... END_OF_DOCUMENT_TOKEN_TO_BE_REPLACED