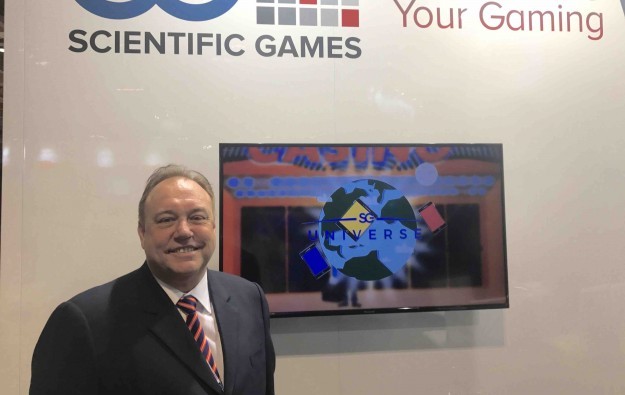 New openings of gaming resorts in Asia and the upgrade of electronic gaming machines on the floor in the Macau market have translated into good business for U.S.-based casino equipment and lottery services firm Scientific Games Corp.

“New openings [of casinos] are always good things from a supplier point of view,” said Ken Jolly (pictured), vice president for Asia of the equipment maker. He was referring in particular to the respective recent openings of Wynn Palace and the Parisian Macao in the Cotai district of Macau, as well as the US$2.4-billion Okada Manila that is due to open in the Philippines by this December.

A lot of slot machines in the Macau market have also been replaced with newer versions that match the city’s 1.1 technical standards introduced in July 2014, he said.

Mr Jolly was speaking on the sidelines of the Macao Gaming Show 2016, a regional casino industry trade show held from November 15 to 17 at the Venetian Macao.

“By the end of this year, every [slot] machine needs to change to 1.1 specifications and… every casino has been upgrading their machines to the new 1.1 standards over the last two years,” said Mr Jolly. “So this year has been a particularly good year for us.”

Macau’s casino regulator, the Gaming Inspection and Coordination Bureau, had issued version 1.1 for the technical requirements of the city’s electronic gaming machines in 2014, giving gaming operators and equipment suppliers time to adjust or upgrade equipment in accordance with them. Version 1.0 of the technical standards had been introduced in 2012.

“Some casinos won’t have all of them [the replacement of machines] done by the end of this year because their capital expenditure [will] exceed the [available] budget,” the Scientific Games vice president added.

Mr Jolly also said he believes the Macau market has found a bottom in casino gross gaming revenue (GGR) terms, following a contraction lasting more than two years. The 8.8-percent growth in Macau casino GGR recorded in October meant that such revenue had expanded year-on-year for three months in a row, after contracting for 26 consecutive months. In the first 10 months of 2016, the city’s casino revenue totalled MOP184.61 billion (US$23.1 billion), still down by 5.8 percent from the previous year.

“There is still a little bit of caution but if this slight growth can continue month after month, that’s a very positive sign that we have come through the worst and we’re going back up,” Mr Jolly noted.

There has also been a trend for gaming operators in Macau, particularly those in Cotai, to lower the denomination for their slot machines on the mass floor, the executive observed. “The 5-cent [slot] machines are actually performing quite well versus the 10-cent or 20-cent machines because the people want to play a bit longer on the machines for more entertainment with multiple bets,” he said.

Looking forward to 2017, Mr Jolly said new casinos in Laos, Cambodia and Vietnam – as well as the opening of the US$3.1-billion resort of MGM China Holdings Ltd in Cotai due in the second quarter of next year – will continue to propel the growth of Scientific Games’ business in Asia.

Apart from Macau, the Philippines is also an important source of revenue for Scientific Games in Asia. “The Philippines has posted a very strong revenue… in the last couple of years with more casinos coming over there [the Philippines],” Mr Jolly added.

The US-based company announced on August 31 a definitive agreement for CAD27.2 million (US$20.8 million) to acquire DEQ Systems Corp, a Canada-based gaming supplier. The latter company provides table-game-bonusing technology, table games, baccarat results tracking and jackpot connectivity products to more than 300 casinos in 30 countries, according to its corporate website.

Regarding the acquisition, Mr Jolly said the deal is still in progress, notwithstanding an approval from the shareholders of DEQ earlier this month. Scientific Games is particularly excited about the EZ Baccarat product of DEQ, he added, declining to give further details before the deal is finalised.

DEQ said in a statement earlier this month the transaction would be completed in the fourth quarter of 2016 or the first quarter of 2017, following compliance with, or waiver of, all the required conditions, including the receipt of approval from the Superior Court of Québec in Canada.

Casino equipment supplier Sega Sammy Creation Inc said in a Friday release it was debuting its Genesis Crest 43J cabinet in Asia. The product will be available at an in-person trade show, G2E Asia:... END_OF_DOCUMENT_TOKEN_TO_BE_REPLACED