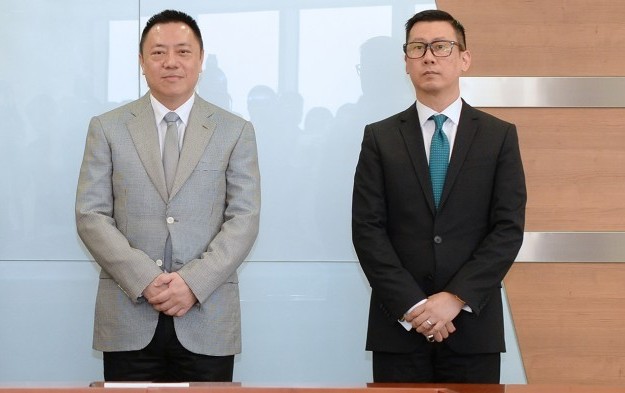 The Macau government needs to improve the legal framework for the city’s gaming industry in order to strengthen oversight of it and to promote its international competitiveness, said Paulo Martins Chan (pictured right), the new director of the city’s gaming regulator.

Mr Chan, a former assistant public prosecutor-general in Macau, was sworn in today, Tuesday, as the new director of the Gaming Inspection and Coordination Bureau, also known as DICJ. He succeeds Manuel Joaquim das Neves, who has retired after almost two decades as director of the bureau.

“The gaming industry, which is going through a phase of adjustment after many years of rapid development, requires an improved legal framework,” Mr Chan said in a speech on Tuesday.

Mr Chan has a bachelor’s degree in law and a master’s degree in criminal law. He was nominated as a prosecutor for the Public Prosecutions Office in 1998 and in 2009 was appointed as an assistant public prosecutor-general.

Mr Chan speaks Chinese and Portuguese – Macau’s two official languages – and English. He has contributed to publications on Macau’s gaming laws, namely with a chapter about “Casino Crimes in Macau” for a book titled “Studies on Macau Gaming Law”.

The aim is “to gradually establish a comprehensive legal framework and monitoring system for the gaming industry, in order to confer an image of credibility and boost the international competitiveness of the sector,” said Mr Chan.

The Macau government is currently assessing a report based on the “mid-term review” of the city’s gaming industry that it commissioned earlier this year from the University of Macau. The preliminary results should be released early next year, the city’s Secretary for Economy and Finance, Lionel Leong Vai Tac (pictured left), had said last week.

At Mr Chan’s swearing-in ceremony on Tuesday, Mr Leong stated Mr Chan was a suitable candidate to head the city’s gaming regulator because of his strong legal knowledge and language skills. The official added that key tasks for Mr Chan would include the enhancement and strengthening of gaming-related regulations.

“I am convinced that DICJ, under the leadership of Mr Paulo Chan, will fulfil its tasks and contribute to strengthening supervision of the gaming sector and improving related laws and regulations,” said Mr Leong.

The secretary also thanked Mr Neves for his time in office, particularly for his contributions to the liberalisation of Macau’s gaming market. Mr Neves first started working for the gaming regulator in 1985 and had led the bureau since 1997. He retired on November 25.

Gross gaming revenue (GGR) in Macau plunged 32.3 percent year-on-year in November to about MOP16.43 billion (US$2.06 billion), according to official data published on Tuesday. It was the lowest monthly GGR tally since September 2010.

Macau mass-market casino gross gaming revenue (GGR) for the recent Chinese New Year (CNY) holidays could have recovered to at least 60 percent of that for the 2019 break, when the festivities were in... END_OF_DOCUMENT_TOKEN_TO_BE_REPLACED