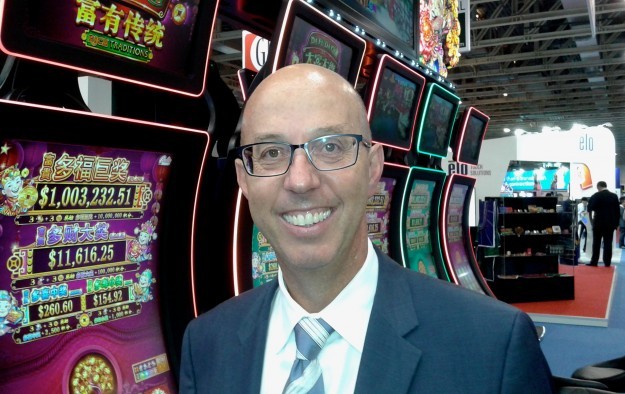 The current downturn in Chinese VIP gambling revenue has seen casinos in Macau and beyond having to do more – squeeze more profit – from lower revenues or lower revenue growth.

In that battle, having in-depth data on your business – especially data about your players – is potentially of value.

Caesars Entertainment Corp – a Nevada-based casino firm that doesn’t so far have an Asian operation – has a 45-million-member player loyalty database known as Caesars Total Rewards that is valued by itself at US$1 billion by the group’s creditors.

Gavin Isaacs (pictured), president and chief executive of Scientific Games Corp – one of the new generation of gaming ‘super suppliers’ recently created in a series of leveraged mergers – told GGRAsia in an interview he thinks his business is well placed to provide technology that will both unlock existing value in Asian casinos’ existing mass-market customer base, and help to build that base, as the industry adapts to a world of slimmed down revenues from high roller customers.

“This Asia Pacific market is becoming a bit like the rest of the markets around the world. There was this massive growth and now it’s getting tighter,” he stated. “So the tools we’ve been using in the rest of the world for people [operators] to get competitive and increase their yields and draw people away from their competition are there. It’s a question of people now wanting to use them.”

He added: “A lot of the guys who run these [Asian] properties are from those [mature] markets. They know this technology capability is there. Now they are in a situation where they need to use it.

Ken Jolly, vice president of Scientific Games Asia, told GGRAsia that a simple example of where systems can help casinos is when the data they carry on players is married to old-fashioned customer service.

“No one really in Macau or in Asia is doing direct hosting on the main casino floor,” said Mr Jolly. “In other words having staff walking round, knowing when a certain customer walks on the floor and then looking after them – with a bowl of noodles or whatever. The casinos need the systems that say ‘The customer’s on the floor, look after that customer, because he or she is good value to me’.

“The operators are now talking to us about how they can make more use of the modules we have available on our floor management systems. Our systems are modular so you can choose to use them or not use them, and you can add them later on,” added Mr Jolly.

But to put in perspective the potential value of the entire Asia Pacific gaming machine market to venue operators, the latest edition of the Global Gambling Report from U.K.-based Global Betting and Gaming Consultants (GBGC) estimated that Asia and the Middle East accounted for 32.9 percent of an estimated US$452.71 billion gross gaming yield (GGY) generated globally in 2014 from all forms of gambling.

GBGC further estimated gaming machines accounted for 19.4 percent of the world market total GGY. Judged purely on a pro rata basis without weighting for player game preferences in individual regions, gaming machines could be generating as much US$29 billion annually from operations in Asia and the Middle East.

A key to building markets for casino games in general and electronic games in particular, says Mr Isaacs, is to ensure you continue to entertain and engage the 20 percent of casino customers that provide 80 percent of the revenue, while engaging new customers and in particular young ones that might have different tastes from their elders.

“If we are going to grow the whole pie, we want to be able to develop content and games and styles that other people will play; not just the whales [highest spending players] all the time,” said Gavin Isaacs.

“At Scientific Games, our size and our scale is one of the keys [to achieving that]. When you have all these synergies, you only need one accounting department, one set of licences, one legal team, one board, one human resources department. That means you have a lot more money to invest in the future and in R&D [research and development] and that’s what we are doing.”

“Everything behind the ‘door’ ultimately will become common, including one operating system. But the ‘door’ itself will have what we call personalities,” said Mr Isaacs, referring to the integration of the businesses. “From a slot machine perspective, we’re keeping the content from all three brands – and they all have their strengths – alive.”

“People like variety on the floor – particularly when there are new casinos opening like in Asia,” added Ken Jolly. “You don’t want to fill that up with 500 of one box. So why not have it in 600 [units] and three or four different boxes?”

Mr Isaacs stated: “It’s important that you have a variety in your cabinets, but you should also have variety of your content, because certain content does really well in different markets and with certain players.

“I would be stupid to think I could build a product in Germany and it’s going to work all round the world. We can however learn from each other. One of our strongest performing slot games in America is Duo Fu Duo Cai, which was developed for the Macau market,” the CEO added.

Consumer research in the U.S. suggests many current slot machine players in that market are middle-aged to elderly. So in North America, companies such as Scientific Games and their market rivals are already adopting strategies to capture the interest of the ‘millennials’ – the group of people that came to young adulthood at the start of the 21st century and typically spend a lot of time online using social media.

“We’ve had the earlier generation of baby boomers around the world. But it’s also important to note that you need to attract the next generation of players,” said Mr Isaacs.

Scientific Games has an interactive product offer called SG Universe that allows the firm to connect outside the casino both with existing players of its casino games and those interested in playing them. Via mobile communications devices, players can connect to a network offering social games; free play casino-style games and player bonuses.

“Then when they come onto the casino [premises] you can ‘re-engage’ them if you will,” said Mr Isaacs.

So far in Asia, most casino regulators appear to have shown scant interest in permitting gaming suppliers to market their casino games via mobile devices while players are on casino premises.

“I don’t think it makes sense to slow down innovation or slow down technology,” stated Mr Isaacs.

“But one thing we’ve learned in gaming is you have to go with the regulators. Bit by bit you can try and show them what you are doing in other jurisdictions, and hopefully they will get the idea. They do talk to each other a lot. But as a technology supplier you never break the rules.”

One of the biggest growth stories in Asia recently in mainstream casino products has been electronic table games, whether using a live dealer or virtual dealer.

Union Gaming Research Macau Ltd said in a report recently that it expected the Asia Pacific casino market to add as many as 7,150 additional seats for electronic table games in the next few years. It further stated that such games might be able to offer casinos better win per table per day, and better margin on EBIT (earnings before interest and taxation) than traditional mass-market live dealer tables.

“What we’re noticing all around the world is growth in games like craps and in the proprietary [table] games. Younger people like those communal-style games,” said Mr Isaacs.

Mr Jolly added: “The three common electronic table games in Asia were always roulette, baccarat and sic bo. But now actually we have stadium blackjack, and Texas hold ‘em in a full electronic table version, and we are developing other games.”

Mr Isaacs stated, referring to Global Gaming Expo (G2E) Asia 2015 held recently in Macau: “If you look at the show there’s a very heavy concentration on all the electronic table games…whether it be virtual dealer or live dealer games. G2E Asia this year is the biggest display of electronic table games we have ever had anywhere in the world.”

“This is another product that we’re taking out of Macau to the rest of the world. It’s a category that’s booming in America at the moment,” he added.

The chief executive said the product integration process for Scientific Games was about refining products rather than pruning the product catalogue.

“We haven’t really killed off any products. What we are trying to do is refine certain products to make sure they work better.”

“I think our size and our synergies give us the ability to invest. And we’re all about investing in the future and in innovation,” he added.

A number of minority political parties in Thailand has submitted a draft amendment to the country’s Gambling Act, with the aim of legalising land-based casinos and online gambling, reported on... END_OF_DOCUMENT_TOKEN_TO_BE_REPLACED