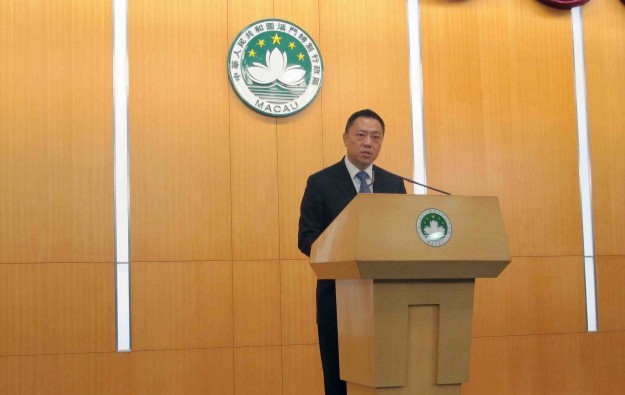 Lionel Leong Vai Tac (pictured), Macau’s new Secretary for Economy and Finance – the official in charge of the city’s casino industry – on Monday said the government would “pay special attention” to the current decline in gaming revenue.

He added he would carefully assess the development of the city’s gaming industry ahead of the renewal of the gaming licences. The current rights of the city’s six Macau gaming concessionaires expire on various dates between 2020 and 2022.

“The renewal of the gaming licences will be a very important task for the next government. We will have to assess all that has been done since the liberalisation [of the gaming industry], not only in terms of gaming but also of non-gaming elements,” Mr Leong told a press conference.

The government had previously said it expected renewal talks with casino operators to begin in 2016.

“We have to analyse what has been done in terms of non-gaming offering and how that has contributed to help the diversification of the city’s economy,” Mr Leong said.

The official declined to comment on specific polices, such as the cap on live gaming tables, saying only: “We will study every policy once we take office.”

The new government will be sworn in on December 20. Chief Executive Fernando Chui Sai On will again lead the government in what will be his second and final term in office.

On Monday, Mr Leong said the government would “pay special attention” in analysing the ongoing decline in gross gaming revenue (GGR), which he called “a new challenge” for Macau’s economy.

Macau’s GGR for November dropped 19.6 percent year-on-year to MOP24.27 billion (US$3.04 billion), according to official data. It was the sixth consecutive month of declines judged against year prior periods.

“The slowdown in gaming revenue is linked to external economic factors that also have an impact on the city’s economy,” Mr Leong said.

Macau reported its first year-on-year economic contraction in five years in the third quarter of 2014 as GGR continued to decline. Gross domestic product for the three months ended September 30 fell by 2.1 percent year-on-year in real terms, the first negative quarterly growth since 2009, the city’s Statistics and Census Service said on Friday.

“There will be a period for adjustment but we have to be optimistic since the long term story of the [gaming] industry is promising,” Mr Leong added.

At the same press conference, the newly appointed Secretary for Transport and Public Works, Raimundo Arrais do Rosário, said he will do his best to improve work in the areas under his portfolio.

Mr Rosário, an engineer, will oversee the government bureau responsible for issuing construction permits. “From what I could see, transport and housing are the two main pressing issues that we need to solve,” he said.

The imminent return of package tours from mainland China will not only help boost Macau’s tourism businesses, but is also expected to help casinos gain more foot traffic in their mass gaming... END_OF_DOCUMENT_TOKEN_TO_BE_REPLACED