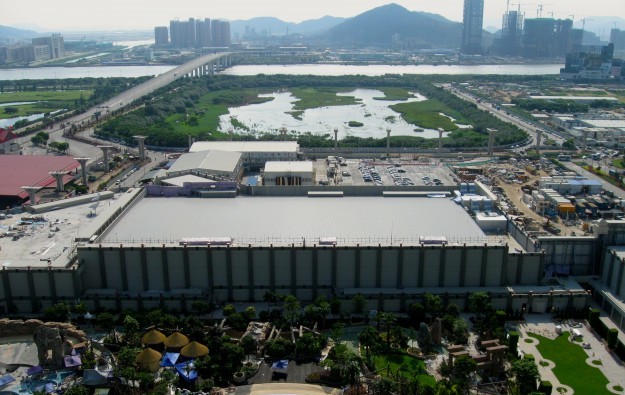 News that eSun Holdings Ltd has signed deals including one for development and operation of a Hollywood film-themed amusement park on Hengqin Island next door to Macau, can be viewed as a positive for Macau as well as Hengqin, said analyst Grant Govertsen of Union Gaming Securities Asia Ltd. ESun Holdings is a Hong Kong-listed holding company that once had an interest in Macau’s Studio City casino project.

“I suspect that a few years down the road several million more people could be making that trek from Zhuhai airport to Hengqin/Macau and would be likely customers for these entertainment developments,” Mr Govertsen told GGRAsia by email.

“I think this shows eSun’s/Lai Fung’s commitment and belief in themed entertainment in the region,” added the analyst.

ESun Holdings gave the news on Monday of two deals for non-gaming attractions on Hengqin in joint announcements with Lai Fung Holdings Ltd, a firm related to eSun Holdings.

One is with Lionsgate Location Based Entertainment Inc, a unit of a major Hollywood film and entertainment producer that owns a number of film franchises including “The Hunger Games” series, “The Divergent” series and the hit film “Now You See Me”.

That licensing deal is for an “Immersive Experience Center” in phase one of what is referred to as the Creative Culture City Project on Hengqin, in Zhuhai prefecture, Guangdong province.

The mainland Chinese authorities have transformed Hengqin – previously a rural and sparsely populated island – as part of the special economic zone of Zhuhai. In just a few years Hengqin has developed commercial, educational and tourist facilities designed to integrate the economies of Macau and Zhuhai. Hengqin is linked by bridge (pictured) to Cotai, a strip of multibillion U.S. dollar gaming resorts that is Macau’s answer to the Las Vegas Strip.

The Lionsgate-licensed Immersive Experience Center at Hengqin will cover 22,000 square metres (236,806 sq feet), and have “at least 10 to 15 attractions” developed from six Lionsgate-owned themes, plus food and drink facilities and retail concessions. The licence is for 10 years with an option to extend for another 10 years, said the filing. It did not mention an opening date for the attraction.

The other eSun Holdings/Lai Fung deal is for a sub-licence relating to a “Family Edutainment Center” on Hengqin, with content provided by the National Geographic Society. It will cover approximately 4,500 sq metres, “containing no less [sic] than five individual attractions including rides, food and beverage facilities, retail premises, virtual reality and/or 4-D interactive experiences, and other types of entertainment and/or educational attractions,” said the second filing. No date was mentioned for its launch.

That agreement will be for 10 years from the initial commercial launch of the Family Edutainment Center, with an option to extend for another five years.

“What I don’t know is whether Western names like Hunger Games will resonate here [in China],” Mr Govertsen said in his email to GGRAsia. “I suspect National Geographic is a no-brainer though,” he added.

“A good proof of concept will be Studio City’s Batman ride and their Warner Brothers zone, which I suspect will generate good levels of visitation,” said Mr Govertsen. He was referring to mass-market non-gaming entertainment provided at the Studio City casino resort on Cotai. The US$3.2-billion gaming resort, the nearest Cotai casino property to the Hengqin border crossing, is majority-owned by Asian casino developer Melco Crown Entertainment Ltd and opened on October 27.

Macau casino operators, including MGM China Holdings Ltd and Galaxy Entertainment Group Ltd, have shown interest in investing in Hengqin. MGM China last year said Chinese authorities were considering whether to give permission for the firm to invest in a non-gaming project in Hengqin.

Galaxy Entertainment has already signed a framework agreement for a RMB10-billion (US$1.58-billion) non-gaming project on a 2.7-square-kilometres (1.0 sq miles) parcel of land on Hengqin. In a filing on October 15, the firm said it is advancing conceptual plans for a “low rise, low density resort” on Hengqin.

Mr Govertsen noted in his Tuesday email on the planned new Hengqin theme park: “For eSun/Lai Fung, the Hengqin location could prove great as Hengqin should be a long-term home run for early movers, especially as you think about the infrastructure being put in place between Zhuhai airport, Hengqin, and Macau.”

“Chimelong’s 2014 visitation was reported at something like five million visitors, which is indicative of this pent up demand,” stated the analyst.

An informal poll – published in July 2014 by Union Gaming Research Macau Ltd, of visitors to Chimelong – indicated at that time that fewer than one in five of the respondents intended to visit Macau on the same trip.

ESun Holdings – an investor via various units in television, film and music production – was originally a backer of what was then known as Macao Studio City via an entity called East Asia Satellite Television Ltd, a vehicle in which Singapore developer CapitaLand Ltd was also an investor.

In June 2011, Melco Crown paid US$360 million to take over leadership of the Studio City casino resort scheme. The project had lain with its foundations part built since 2007 after the original set of investors could not all agree on the funding.

Macau’s casino gross gaming revenue (GGR) for the first five days of February is estimated at MOP1.9 billion (US$235.1 million) – or MOP380 million per day – a level that suggests a “45... END_OF_DOCUMENT_TOKEN_TO_BE_REPLACED