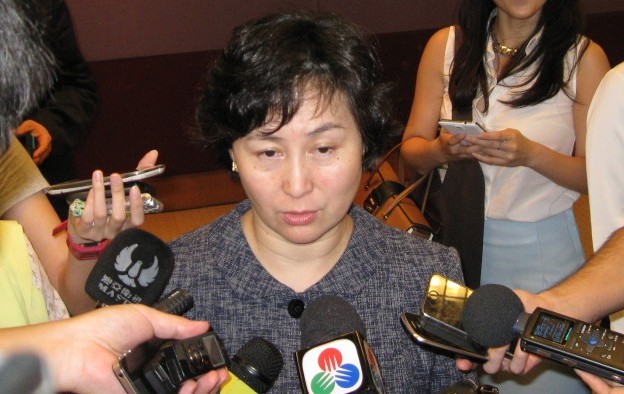 It comes after what was described as a 20-month investigation focusing on Pansy Ho Chiu King (pictured), MGM Resorts’ partner in the Macau market.

Deutsche Bank’s Carlo Santarelli said although Wednesday’s decision was widely anticipated, it was likely to be a positive catalyst for MGM Resorts’ stock.

MGM Resorts had been effectively forced to give up control of its interest in the Borgata Hotel Casino and Spa, one of Atlantic City’s best-performing gaming properties, because of New Jersey’s issues with Ms Ho.

The controversy surrounding Ms Ho’s connection to MGM Resorts goes back more than 20 months. Her link to MGM Mirage – the predecessor of MGM Resorts – via an initial 50:50 Macau joint venture, was cleared by the Nevada Gaming Commission in March 2007 after she personally gave evidence to its members.

But the concerns of New Jersey – which under the U.S. regulatory system gets to have a say about any operation anywhere that is run by one of its licensees – had rumbled on since 2005. Things came to a head in May 2009, when the New Jersey Division of Gaming Enforcement produced a long report that concluded Ms Ho was “unsuitable” because of her extensive ties to her father, the former Macau casino monopoly holder Stanley Ho Hung Sun. He in turn had been linked by some regulators and law enforcement bodies to involvement with Chinese organised crime.

A lot has happened since 2009, and most of it not to Atlantic City’s advantage.

Privately-held Trump Entertainment Resorts Inc – one of the main casino operators in Atlantic City – on Tuesday filed in the U.S. for Chapter 11 bankruptcy protection. There were also reports that Trump Taj Mahal, its remaining asset in Atlantic City (with Trump Plaza due to close next week), may also shut down as soon as November 13 with all operations ceasing by November 27.

Revel Atlantic City, controlled by Revel Entertainment Group LLC, and which only opened on April 2012 at a cost of US$2.4 billion, closed last week, and could be bought out for as little as US$90 million.

On Wednesday New Jersey officials voiced satisfaction with the deal with MGM Resorts.

Matthew Levinson, chairman of the New Jersey Casino Control Commission, said of MGM Resorts: “When I look over the last nine years, I see a company that looked for a way to get to the most lucrative gaming market on the planet…But I also see a company that took steps to remedy problems created by those shortcuts.”

New Jersey’s about face on Ms Ho and MGM Resorts comes after a meeting on Monday called by the state’s governor and potential Republican presidential candidate Chris Christie. He reportedly discussed with gaming industry executives and state and local elected officials the current problems of Atlantic City.

MGM Resorts is one of the biggest owners of undeveloped casino-zoned property in Atlantic City. It controls a 72-acre (29-hectare) parcel on Renaissance Pointe in the city’s marina district, and a 14-acre parcel across from the Borgata.

During Wednesday’s meeting, members of the commission questioned MGM’s chief executive Jim Murren about his plans for Atlantic City.

“We’re going to go at this very aggressively,” Mr Murren said. “I’m acutely aware of the sad situation that has beset the city. I don’t have any answers now, but I’m going to try very hard.”

In its redacted report of May 2009, the New Jersey Division of Gaming Enforcement had raised questions about Ms Ho’s independence from her father, indicating he had fronted much of the US$200 million needed to buy the Macau gaming sub-concession held by his company SJM Holdings Ltd and used by MGM Resorts’ joint venture in the Macau market.

Following that report, MGM Resorts had pulled out of the Atlantic City market voluntarily, putting its 50 percent Borgata ownership into a fund controlled by a trustee, who was supposed to sell the interest if MGM Resorts didn’t find buyers.

But MGM Resorts received an extension, and then a stay, on plans to sell its interest controlled by the fund. In the meantime, its joint venture with Ms Ho floated on the Hong Kong stock exchange in 2011, leaving MGM Resorts with a majority stake of 51 percent and Ms Ho with cash and a much-diluted holding below 30 percent.

The imminent return of package tours from mainland China will not only help boost Macau’s tourism businesses, but is also expected to help casinos gain more foot traffic in their mass gaming... END_OF_DOCUMENT_TOKEN_TO_BE_REPLACED