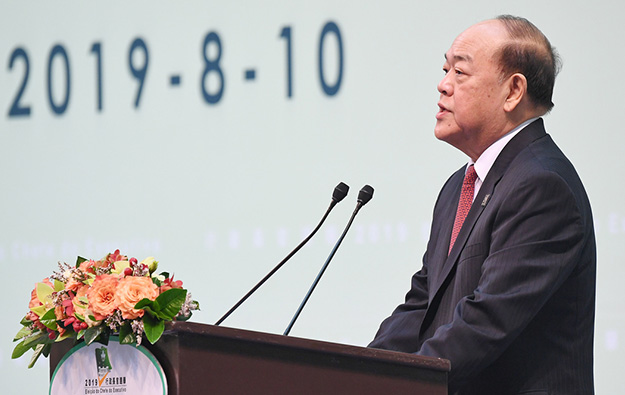 Macau’s six casino business licensees have a good chance of having their local gaming rights refreshed beyond their upcoming expiry dates in 2022, several local gaming lawyers and scholars remarked to GGRAsia.

A new local government will be in post in the lead up to that process. Chief Executive-designate Ho Iat Seng (pictured) takes office this December.

Questions remained – commentators told us – about how Mr Ho and his new administration would be able to achieve Macau’s pre-existing policy aim of fostering a “healthy” development of the city’s gaming sector; as well as reduce the city’s economic reliance on casino earnings, an aspiration of China’s central government.

The amendment of Macau’s gaming law framework would be one of the key tasks to be addressed by the new administration, said Mr Ho last month.

Several observers told us they expected the new team would want to address the anomaly of “sub-concessions” in gaming. Macau was supposed to have only three operators or public “concessions” under market liberalisation at the turn of this century, but  the system was tweaked to allow three sets of further rights as “sub-concessions” of the original three permissions.

Under Mr Ho’s new administration, the existing gaming sub-concessions would in likelihood get refreshed rights in the form of full concessions: additionally, there would possibly be changes to the legal framework in order to have the possibility of having several more concessions beyond the current tally of six, several local gaming lawyers and scholars respectively told us.

The existing Macau gaming licensees – including the ones with American parent firms – would in likelihood have a good chance of having their gaming rights refreshed even under the persisting United States-China trade war tensions, said Bruce Kwong Kam Kwan, a public administration scholar at the University of Macau.

Though he added that in view of the “the billions” of U.S. dollars in private investment made during the past two decades on construction of new casino resorts and the number of jobs created for locals in order to operate them, it was likely that the current licensees ” including the American companies, will all be able to stay” in the market, Mr Kwong remarked to us.

Macau-based lawyer Pedro Cortés, a specialist in gaming-related matters for the Rato, Ling, Lei and Cortés law practice, said he believed a new public tender process – when it came – would encompass the possibility of having more than six concessions.

Referring to a mechanism in the current legal framework, that allows a temporary extension of the existing rights, Mr Cortés told GGRAsia: “In my opinion… the new chief executive will extend the existing concessions – and sub-concessions – for five more years, i.e., up to 2027, which is allowed under the current Gaming Law.”

He added: “In parallel, and given what is at stake, I will bet on more concessions – one or two – to be added. This will trigger a new international public bid for that purpose.”

Prior to that, it was advisable that a “concrete political statement” be made in relation to the situation in Macau “in order to calm the [existing] stakeholders and operators as we have huge investments which are not yet finished,” with works “due to be completed next year”.

Mr Ho and his new government would also have to pursue ancillary pieces of gaming legislation, several local gaming lawyers remarked to us.

Macau-based gaming lawyer Bruno Beato Ascenção told us such further legislation would enable the government to: “regulate and better define, among others, who are deemed to be key employees of the concessionaires”; clarify the situation regarding “the reversion to the Macau SAR of the casino gaming equipment upon termination of a gaming concession; and to deal with “passing a regulation regarding administrative offences committed by gaming operators and junkets”.

Mr Correia further noted to us – referring to a system in Macau whereby the entity that holds the local gaming licence must be a locally-incorporated business, rather than the public company that fronts the gaming business and raises the capital investment: “… the current regime of managing directors – in Portuguese, ‘administradores-delegados’” for such local units “should be reviewed”.

He added with such managing director roles it should be “determined with the utmost rigour” how to address “situations of conflict of interest and the obligation to exercise these duties exclusively”.

“Managing directors of concessionaires should not be allowed to exercise other activities, whether paid or unpaid. Once again transparency and public interest require it,” said Mr Correia.

The city’s incoming chief executive and his team would also need to look at the status of the city’s “satellite” casinos, which are currently run under so-called service agreements reached between third-party investors and some of the existing gaming licensees, noted Mr Correia and Macau-based gaming scholar Wang Changbin, director of the Centre for Gaming and Tourism Studies at Macao Polytechnic Institute.

Mr Correia remarked to us: “Consideration should be given to the possibility of third parties being able to own and operate casinos without holding concessions, in order to avoid situations such as those in the past,” involving people “who did not own any concession to own casinos, which in my view was flagrant illegality and has severely penalised public interest”.

Mr Wang suggested that the Macau government could face a different set of “problems” if the gaming rights of the city’s existing satellite casinos were actually eliminated. But should it be decided that the satellite casino system could continue, the new government should impose greater scrutiny on such venues, the scholar remarked.

“Macau gaming law stipulates that the [local] government has to do suitability checks on shareholders that have a stake of 5 percent or more; and on the key employees in a concessionaire firm: but what about the satellite casinos?” Mr Wang said.

“I think the Macau government does understand the background and operation of satellite casinos, but legally that is not reflected how they are being monitored,” Mr Wang added.

Mr Wang told us, referring to the “healthy development” of the casino industry often mentioned by Macau officials: “To help the industry to sustain a healthy state could mean reinforcing oversight of it.” He added: “In that respect, I think VIP gaming in Macau and its operational model is a potential target, but it would be a difficult mission for the government.”

The Macau government released on Wednesday a so-called “mid-term review” of its first Five-Year Development Plan.  The review mentioned that an industry consultation on the proposed rejig of the rules regulating junkets had been completed. But the document did not mention either the nature of such regulations; when they might enter the legislative stage; or the details of the consultation process.

VIP gaming had been making some contribution to the city in terms of direct public taxation imposed on it, and high-roller play still constituted a significant portion of Macau’s gaming income, the scholar noted.

But he added: “The Macau government would need to seek a balance between gaming income and how it exercises control on this [VIP] gaming segment.”

An even more daunting task for Mr Ho and his new team would be the much-discussed diversification of the city’s economy from high-stakes casino gambling, Mr Wang and Mr Kwong remarked.

“It has to go beyond the gimmick of the Guangdong-Hong Kong-Macau Greater Bay Area initiative,” public administration scholar Mr Kwong remarked to us.

“The new government has to identify what is the next new industry that can help Macau; one that is not related to gaming,” Mr Kwong remarked, “It also has to answer how the city’s economic structure can be more balanced, and local young people can get to have more career choices.”

The casino at the Jeju Dream Tower resort (pictured), in the capital of the South Korean holiday island of Jeju, recorded KRW18.5 billion (US$14.5 million) in gaming revenue for the three months to... END_OF_DOCUMENT_TOKEN_TO_BE_REPLACED