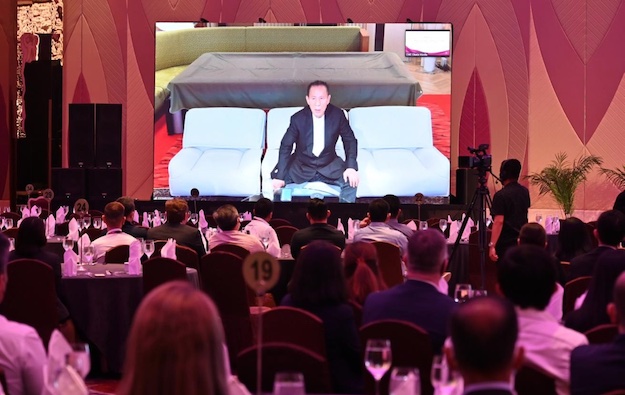 Japanese entrepreneur Kazuo Okada has assured workers at the Okada Manila casino resort in the Philippines that the property’s new board “is sincere in its pursuit to better serve the needs” of staff, while “at the same time elevating Okada Manila to greater heights of success”.

According to a press release filed on Monday on the website of the promoter of the Okada Manila, the comments were made on Monday afternoon via videocall in what was presented as a “town hall” event (pictured), in which Mr Okada addressed senior management and senior staff of the property.

The Japanese entrepreneur – who was presented in the release as “newly-reinstated Okada Manila chairman and chief executive” – “explained to those present [at the town hall meeting] the recent events that have occurred during the enforcement of the ‘status quo ante order;” on May 31.

An email in mid-May to GGRAsia from casino equipment supplier Aruze Gaming Macau Ltd, a company founded by Mr Okada, had said the late-April court order in the Philippines would “restore the composition of the board of directors” of Tiger Resort, Leisure and Entertainment Inc (TRLEI) to the composition it had in 2017 “before the dispute between Universal Entertainment Corp and Kazuo Okada began”. That year he was ousted from the group’s ultimate parent, Universal Entertainment, the Japanese leisure conglomerate he founded.

TRLEI is the the promoter of the Okada Manila. Until the court order, it was under the control of Universal Entertainment.

Mr Okada’s side has said it entered the Okada Mainla premises on May 31 to enforce the order. His representatives were accompanied by police officers. The country’s gaming regulator, the Philippine Amusement and Gaming Corp (Pagcor), subsequently said a monitoring team it had on site had observed the event.

Universal Entertainment has described the action by Mr Okada’s side as a “violent” act of “takeover”. The group of the Japanese businessman has denied violence was involved.

On Monday, members of the ousted board of Okada Manila said they were suing Mr Okada and his partners, accusing them of coercion and other misconduct during the “violent and illegal” seizure of the property.

In a separate development, Pagcor issued a press release on Monday countering claims by Universal Entertainment decrying the “biased involvement” of the Philippine casino regulator in the dispute between the company and Mr Okada’s side.

In its latest release on the matter, Pagcor said all it did was “to follow the law and court processes.” The document added that the regulator was bound to comply with the status quo ante order issued by the Supreme Court.

The release added: “Pagcor emphasises its neutrality in the intra-corporate dispute in Tiger Resort, Leisure and Entertainment, Inc., in light of news reports accusing the regulator that it is biased in favor of the group of Mr Okada. Pagcor has only recognised and will only recognise, the orders of the Supreme Court and will exercise its authority as regulator without violating or disrupting the status quo ante order and other orders issued by the Supreme Court.”

Hong Kong-listed Wynn Macau Ltd says it will inject nearly MOP4.80 billion (US$596.4 million) into Wynn Resorts (Macau) SA. That is in order to comply with Macau’s revised gaming law and the... END_OF_DOCUMENT_TOKEN_TO_BE_REPLACED