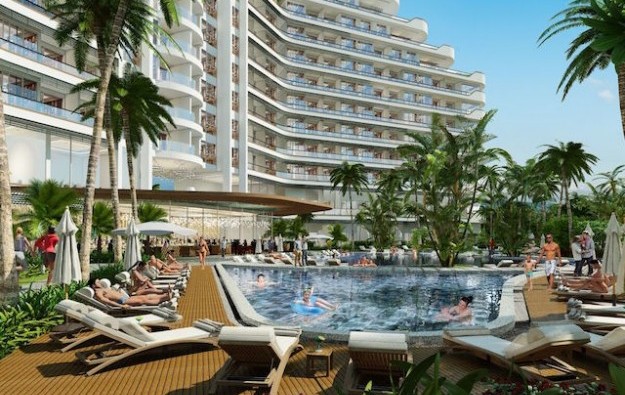 The promoter of a beachside Vietnam casino resort and real estate project called the Ho Tram Strip announced on Thursday the start of construction for a new phase.

The Ho Tram Project Company said in a Thursday release that the Kahuna Ho Tram Strip (pictured in an artist’s rendering) would feature 164 “condotel” units – understood to be a reference to condominium hotel – and 44 villas. The new phase has been designed by the Ho Chi Minh City office of Korn Architects, according to the announcement.

“With the commencement of piling today, we aim to be fully operational in early 2019,” Michael Kelly, executive chairman of the Ho Tram Project Co was cited as saying. The entity is a wholly-owned subsidiary of the overall scheme’s promoter, Asian Coast Development Ltd.

The first phase of the Ho Tram Strip – known as The Grand casino resort and featuring a 541-room hotel, opened in July 2013. In October 2015, the Ho Tram Strip opened The Bluffs, an 18-hole golf course designed by golfer Greg Norman.

Current construction includes a 559-room second tower for The Grand – called The Beach Club – which the promoter says will be a five-star hotel and when completed – in 2018 – it would increase the resort’s room capacity to 1,100 units. The promoter also plans expansion of entertainment and leisure activities.

The Thursday release said that the Ho Tram Project Co has “over US$1.1 billion” in “deployed and forward-deployed capital”.

It had been reported in the Vietnamese media that locals would be allowed to gamble at selected domestic casinos starting this month, after a follow-up government decree on the topic in October.

Only casino resorts with a total capital investment of at least US$2 billion – including gaming and non-gaming facilities – will be eligible to welcome Vietnamese to gamble, according to previous media reports. Local gamblers will be required to pay VND1 million (US$43.9) for a 24-hour casino pass or VND25 million for a month-long pass.