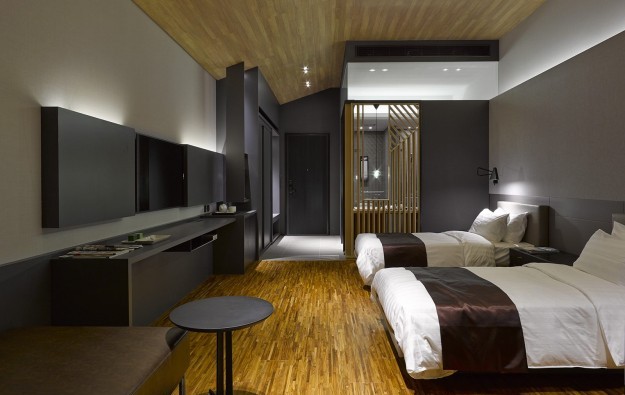 Midori Clark Hotel and Casino in the Philippines is to have a soft opening this week for the casino only, initially with 12 gaming tables and 140 machines. The property will eventually have 39 tables and 160 gaming machines.

“The grand opening including the hotel will be end of June or first week of July,” said the marketing team of the property in an email to GGRAsia.

The property is at Clark Freeport Zone, Pampanga, on Luzon Island. It is described as a five-minute drive away from Clark International Airport and fewer than two hours’ drive from the north of the country’s capital Manila.

“We are opening only two food and beverage outlets at the moment for the casino operations,” the marketing team said.

The property covers 9,900 square metres (106,500 sq feet) and is slated to have 111 rooms (one shown here in a rendering) using eight different floor plans and sets of room fittings. The venue will also have a ballroom with capacity for 400 guests, according to a press release.

Other facilities will include five dining outlets, a spa, gymnasium, swimming pool, mahjong rooms, and a karaoke venue.

In other developments in the country’s gaming sector, the Philippine Star newspaper reported on Monday – quoting the entrepreneur – that Enrique Razon would build a second casino in that country, starting next year.

Mr Razon’s firm Bloomberry Resorts Corp – which controls the Solaire Resort and Casino in Manila – bought the land for the new project from the National Housing Authority last year. It did so via Bloomberry’s hotel and resort development arm Sureste Properties Inc.

“It [the new project] would be more similar to Solaire. There may be some mixed-use because there is no height restriction. There will be a casino,” Mr Razon told the Philippine Star.

In a statement to the Philippine Stock Exchange on Monday, Bloomberry Resorts confirmed the statement made by Mr Razon. “However, we note that these plans are subject to relevant regulatory and government approvals,” said the firm.

Most of Macau’s casino operators are likely to generate positive free cash flow in the first quarter, given the robust recovery level of mass-market gross gaming revenue (GGR) in January, relative... END_OF_DOCUMENT_TOKEN_TO_BE_REPLACED