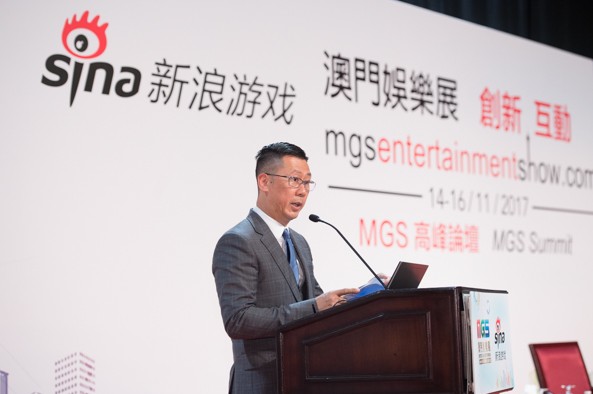 Paulo Martins Chan (pictured), the director of Macau’s Gaming Inspection and Coordination Bureau – a body also known by its Portuguese acronym DICJ – says the regulator will be introducing next year amendments to Administrative Regulation No. 26/2012 on the “Regime for the Supply and Requisitioning of Gaming Machines, Equipment and Systems”.

“We hope to introduce the new regulation next year. Since it is an administrative regulation, the process is easier than with a law,” said Mr Chan.

He added: “We have just collected opinions from the [gaming] sector, and we plan to submit early next year the amended administrative regulation to the Executive Council.”

Mr Chan’s remarks were made on the sidelines of MGS Entertainment Show 2017. The three-day trade show and conference – focused on the Asian gaming industry – runs until Thursday at the Venetian Macao casino resort.

Macau’s gaming regulator had previously told GGRAsia that two of the ideas being considered in this revision were: introducing a stringent requirement on the certification of gaming machines; and introducing penalties in case of violations of the administrative regulation.

Mr Chan said on Tuesday that the penalties might apply “to all parties” within the sector, including gaming machine manufacturers and distributors, casino operators and testing laboratories.

“Continuous enhancement of the legal framework is necessary as the [gaming] industry continues to evolve,” Mr Chan had said in his speech earlier on Tuesday.

“Enhancing timely and proper supervision will certainly cause challenges and impacts for the gaming industry, as it may require additional resources and efforts from the gaming operators and junket promoters,” said Mr Chan. “Nevertheless, enhancing timely and proper supervision has shown positive effects for the sector,” he added, although didn’t clarify the specifics on that point.

Mr Chan additionally said his bureau expected to have ready before the end of this year a final report on the proposal to ban Macau-based gaming workers from casino floors outside work hours. He said the move aims to curb problem gambling among casino employees.

“We are now compiling all the opinions collected from the public and producing the final report, which we expect to have ready before the end of the year,” said the DICJ director.