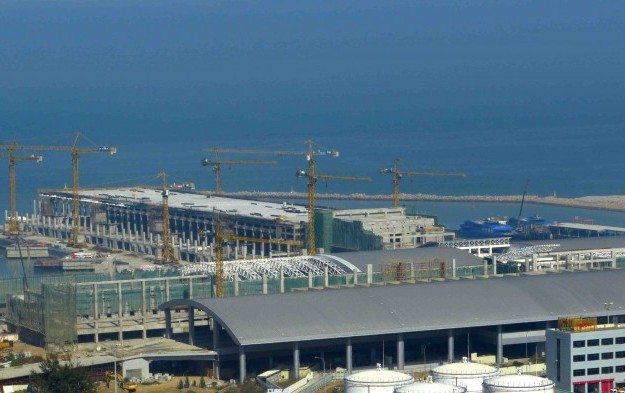 Macau’s new Pac On ferry terminal – located near the airport on Taipa Island and designed to bring mass-market tourists direct to the nearby Cotai resorts – will start operations only at the “beginning” of 2017 at best, GGRAsia has learned.

Last December, the Secretary for Transport and Public Works, Raimundo do Rosário, said it was expected that the new Taipa ferry terminal would be operational by mid-2016.

The Infrastructure Development Office – the government body in charge of overseeing the construction of the ferry terminal scheme – has now told GGRAsia that it expected to hand over the project to the Marine and Water Bureau by the end of next month. The latter body oversees maritime transportation in Macau.

“If we can take over the new ferry terminal in this quarter, we’ll strive to finish the preparation work for the ferry terminal operations within six months,” a spokesman from the Marine and Water Bureau told GGRAsia. The spokesman added: “That would mean the terminal can operate in the beginning of 2017.”

Currently a temporary Taipa ferry terminal – with a limited number of sailings per hour – operates next door to the under-construction one.

One of the government’s stated uses for the new site was to help deliver more tourists to the Cotai area and the casino resorts there. Currently many tourists arriving by ferry disembark at the Outer Harbour Ferry Terminal on Macau peninsula and are then taken to Cotai by shuttle bus.

The Pac On ferry terminal is to have eight operational berths for commercial ferry services at an initial stage, the Marine and Water Bureau representative stated. An additional three berths would also be made available at that initial stage, but would be largely reserved for government use, he added.

Another eight berths for use by commercial ferry services would come into operation in later stages, said the spokesman for the Marine and Water Bureau.

The Pac On ferry terminal project has been marred by reported delays and controversy, mainly as the result of changes in the design of the terminal, including its enlargement.

The budget for the project was MOP583 million (US$72.9 million at current exchange rates) in 2005 when construction started, but it had swelled to MOP3.28 billion by 2013. In December last year, the head of the Infrastructure Development Office, Chau Vai Man, said the government would strive to keep the overall project cost at below MOP3.8 billion.

Macau’s casino gross gaming revenue (GGR) for the first five days of February is estimated at MOP1.9 billion (US$235.1 million) – or MOP380 million per day – a level that suggests a “45... END_OF_DOCUMENT_TOKEN_TO_BE_REPLACED