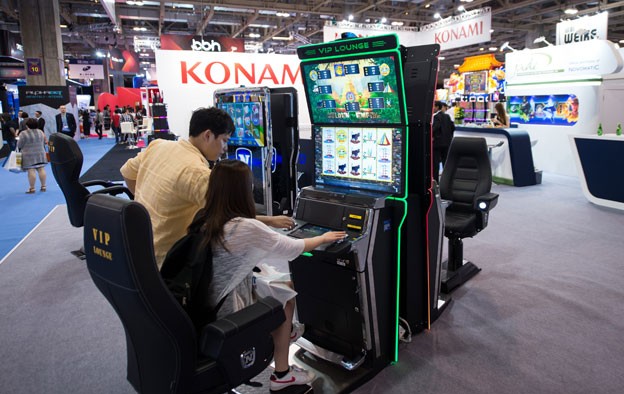 Gaming technology provider Novomatic AG Group is making the Asian debut of its latest products at this year’s Global Gaming Expo (G2E) Asia, eyeing a bigger market share in the region. Novomatic is represented on the stand of its Asian distributor, Jade Entertainment and Gaming Technologies Inc.

There is much to choose from in the new line-up of products, Mike Robinson, manager of international communications for Novomatic, told GGRAsia.

Two of Novomatic’s most successful gaming cabinets – the Gaminator and Duo Classic – have been redeveloped into the Novostar II, which the company says is performing very well internationally.

“This is a refurbished cabinet, with a brand new front. It’s generating a lot of interest,” said Mr Robinson. The Novostar II – on show for the first time in Asia – was developed with new “design components”, including two integrated 24-inch LED HD touch displays, according to the company.

But it is a different cabinet – the VIP Lounge – creating “the most buzz” at the show for Novomatic this year, said Mr Robinson.

The VIP Lounge (pictured) integrates two 32-inch HD LED screens and a “very comfortable” chair, with an ergonomic design and integrated sound system, said the company. It also has a 12-inch player interface as well as various button panel layouts available, including buttons on the armrests of the chair.

“We’ve seen more people flocking around the VIP Lounge. People like the fact that they can seat and use the buttons on the chair because that’s quite a new concept,” said Mr Robinson.

Novomatic says the VIP Lounge cabinet is all about creating a VIP experience, without taking too much space on the casino floor. “A lot of the Asian customers haven’t seen that concept before and they like the idea of bringing the VIP experience at an affordable price into the mass segment,” said Mr Robinson.

“The original Gaminator has been the bread and butter of Novomatic for a long time internationally,” said Mr Robinson, adding that the Gaminator Scorpion builds on the success of its predecessor.

“We are really hoping that this is going to be a standout cabinet worldwide,” he added.

Both the VIP Lounge and the Gaminator Scorpion have been approved almost everywhere in Asia. “In Macau, they are both in the final stages of approval,” said Mr Robinson.

Austria-based Novomatic Group operates more than 235,000 gaming devices and video lottery terminals in more than 1,600 outlets including gaming parlours and casinos, according to its corporate website. The company is active in several gaming segments around the world including casino, lottery, sports betting, online and mobile.

The company announced a fortnight ago record annual turnover for fiscal year 2015, an increase of 5.5 percent in year-on-year terms to EUR2.09 billion (US$2.34 billion).

Novomatic says it expects to expand its footprint in Asia with the new line-up of products.

“We’re represented here in Asia by Jade Entertainment. They have been showing our products to all their existing customers and we are hoping, especially with these two new cabinets [VIP Lounge and Gaminator Scorpion] that we are going to start making more sales in Asia,” Mr Robinson told GGRAsia.

He added: “Traditionally we haven’t had a great share of the market floor here, and so we’re hoping that with these two new cabinets we’re going to make more of an impact.”

Jade Entertainment has recently closed a deal to install 125 of Novomatic’s TouchBet roulette terminals at Resorts World Genting, Malaysia’s only licensed casino, located in Genting Highlands and operated by Genting Malaysia Bhd. That is in addition to the 420 other Novomatic machines already in operation at Genting Highlands.

Novomatic has a strong presence in Europe and Latin America, and is now “really looking at markets such as North America and Asia,” Mr Robinson stated.

The company is in the process of acquiring a 53-percent stake in Australia-based Ainsworth Game Technology Ltd for a total cash consideration of about AUD473.3 million (US$341.1 million). The deal is still subject to regulatory approval and consent from Ainsworth’s shareholders.

Novomatic will be present at Macao Gaming Show later this year with its own booth. The company announced in December that over the next three years it would attend only one of the two gaming trade shows held annually in Macau.

“There’s no real reason to go to both shows. G2E Asia is still important, so that’s why we have a presence here via Jade. But we had to select one of the shows, and Macao Gaming Show has got closer association with the government … and we are connected with the association [that organises the show],” said Mr Robinson.

The Macao Gaming Show is organised by the Macau Gaming Equipment Manufacturers Association.

The imminent return of package tours from mainland China will not only help boost Macau’s tourism businesses, but is also expected to help casinos gain more foot traffic in their mass gaming... END_OF_DOCUMENT_TOKEN_TO_BE_REPLACED