No casino links plus for Ho Iat Seng re Macau top job: expert 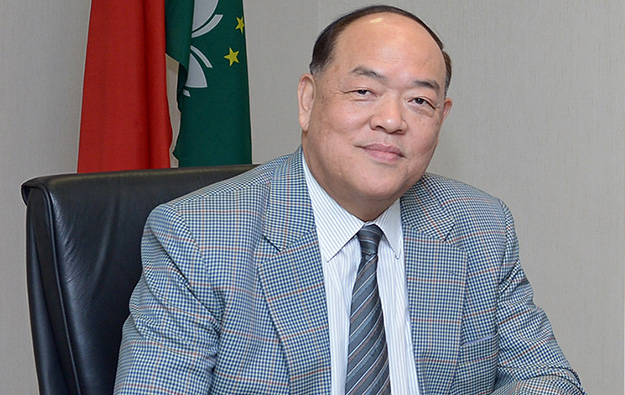 The first and so far only person to declare as a candidate for this year’s process to select the next chief executive of Macau might benefit in Beijing’s eyes from having no direct links with the city’s dominant casino industry, noted a commentator approached by GGRAsia.

Ho Iat Seng (pictured), currently president of Macau’s Legislative Assembly, declared his candidacy for the city’s top job at a media briefing on April 18. Mr Ho is no relation of either Edmund Ho Hau Wah, the first Macau chief executive, or of Stanley Ho Hung Sun, the former monopolist of Macau casino business.

The selection of the next chief executive is to be conducted later this year. It is done not by direct voting among the adult population, but by a 400-strong election committee including representatives of various sectoral interests including industry, commerce, finance, labour and education. On June 16 there will be a poll among the sectors to choose their representatives to sit on the election committee, according to a Monday announcement from the city’s government.

Mr Ho, aged 61, a veteran of the local political scene, had said at the press briefing about his candidacy that he had yet to come up with his political programme.

Larry So Man Yum, a political commentator and a former tertiary education professor in Macau, told GGRAsia: “An advantage that Ho [Iat Seng] has is that he has a background as a businessman, but he has no direct [business] relation with the gaming industry. So in Beijing’s eyes, Ho is in an objective position to lead on the city’s gaming affairs.”

Mr So noted: “One of the most challenging tasks that the new chief executive has to face is to lead the rebid process regarding Macau’s gaming concessions, and to decide if the city should accommodate any new concessions.”

The commentator added: “The new chief executive also has to lead the city to overcome challenges from its tourism-capacity constraints, and any shifts in the whole gaming and tourism market structure.”

One of the policy aims of China’s central government, echoed by public policy initiatives in Macau, is to diversify the local economy; especially in relation to its contemporary dependence on high-stakes casino gambling. The VIP segment is seen by investment analysts as one of the most volatile segments of Macau’s gaming industry, for reasons including its linkage with consumer credit conditions in mainland China, and the possibility of business recession linked to China’s periodic though ongoing crackdown on corruption.

Macau’s incumbent chief executive, Fernando Chui Sai On, said last week that there was no need to delay the launch of a fresh public tender process for gaming rights prior to the expiry in 2022 of the city’s current six gaming concessions. But Mr Chui did not specify at the time whether such a process would be in that expiry year.

Candidate Mr Ho has long-running ties with political structures in mainland China. He has been serving as a member of the Standing Committee of the National People’s Congress (NPC) since 2000. On Tuesday the Standing Committee approved Mr Ho’s request to resign from his NPC role, a move that clears the way for his candidacy for the top Macau job.

Carlos Eduardo Coelho, a senior associate at Macau law group MdME Lawyers, told GGRAsia regarding the declared candidate for chief executive: “I do not anticipate that the lack of governmental experience, which has currently been listed as one of his major limitations, shall necessarily be a disadvantage in dealing with the expected gaming concessions’ public tender process.”

Mr Coelho added, referring to the candidate’s ability to supply leadership on gaming industry issues: “Provided he can gather next to him a strong and reputable team – capable, with a clear and sustained vision for Macau’s future – with leadership power, I believe it will be possible to do a good job in this specific area.”

Mr Ho had noted in his April 18 media briefing that the new chief executive would need to “resolve livelihood issues” – usually a reference in Macau to supporting local people’s standard and quality of living – further efforts to diversify the local economy and “integrate” the city in the Guangdong-Hong Kong-Macau Greater Bay Area. The latter is a central government initiative to draw closer a number of local economies, namely nine cities in Guangdong province, Hong Kong, and Macau.

Sérgio de Almeida Correia, a Macau lawyer with a specialist knowledge of gaming-related topics, expressed some reservations about candidate Mr Ho’s lack so far of public announcement regarding a political programme.

Mr Correia told GGRAsia: “In terms of casino gaming issues, he [Mr Ho] also has no experience whatsoever, and it is even more incomprehensible that, at a really important moment for the future of Macau, he dismissed the Legislative Assembly’s most experienced legal advisor on gaming issues, the only one who participated since the very first moment in drafting all the casino gaming legislation and followed the previous international tender.”

That was a reference to Paulo Cabral Taipa. He, along with another veteran Legislative Assembly legal adviser Paulo Cardinal, had been given notice last year that their work contracts were not being renewed with effect from end-2018 after decades of service at the assembly.

Mr Correia stated, referring to candidate Mr Ho’s credentials as having served on China’s NPC, an advisory body to China’s leadership: “Being a member of the Standing Committee of the NPC can give him some personal experience and knowledge of the people, as well as of the regime, political and legal systems of China and its institutions, but Macau governance is another story.”

Singapore has the potential to be a “top choice” for Chinese outbound travellers, once the country reopens and eases travel restrictions associated with the Covid-19 pandemic, suggested... END_OF_DOCUMENT_TOKEN_TO_BE_REPLACED