No casinos sought yet at Macau Legend new hotels: DICJ 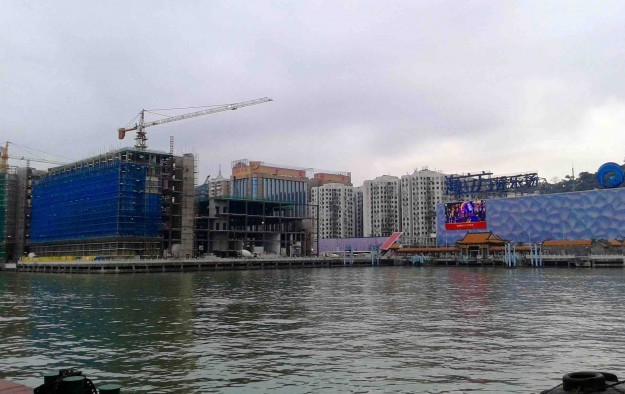 Macau’s casino regulator, the Gaming Inspection and Coordination Bureau, told GGRAsia that it has not received any application so far regarding the setting up of casinos at two new hotels being developed by casino services firm Macau Legend Development Ltd, at Macau Fisherman’s Wharf (pictured left).

Hong Kong-listed Macau Legend – co-chaired by former Macau legislator David Chow Kam Fai – said in its annual results filed on March 23 that a “new in-house casino” would be included in each of two new hotels at Fisherman’s Wharf. They are the Legend Palace Hotel and the Legendale Hotel.

“Until now, DICJ has not received any application for establishing a casino [sic] at the hotels… mentioned,” said the gaming bureau, also known as DICJ, in an emailed reply to an inquiry by GGRAsia.

On March 23, Macau Legend reported a net loss of HKD268.5 million (US$34.8 million) for the full year of 2015. In that day’s filing, Macau Legend said the currently under construction, 223-room, Legend Palace Hotel was likely to be completed in June. The filing added that the property would enable the company “to be much more competitive in the premium mass and VIP market”.

In a separate statement released that day, Mr Chow said his company intended to expand New Legend – its self-run VIP gaming operation in existing Macau casino properties – and start such gaming at the Legend Palace Hotel. The same statement said the firm hoped to open Legend Palace by the end of this year.

The Legendale Hotel is to include 500 rooms and a casino, according to the March 23 stock exchange filing. The property has been facing some public opposition after Macau Legend applied to have the building’s height increased by 50 percent, to 90 metres (295 feet). The government has yet to approve the request. In is 2015 annual results announcement, Macau Legend’s management revised the Legendale Hotel’s construction completion target date from 2017 to “end of 2018”.

The most recently opened hotel at Fisherman’s Wharf is the 444-room Harbourview Hotel, which started operations in February 2015.

As at December 31, Macau Legend had access to a total of 179 gaming tables, according to the company’s annual results. The tally was six fewer tables than were available to Macau Legend a year earlier. Of the 179 available, 127 were “put into operation”, said Macau Legend. The company did not explain why more than 50 tables were not being used at that time.

In October 2014, Macau Legend said it had been granted “35 additional gaming tables” by the Macau government. As a gaming services business it does not hold table quota in its own right, but instead must rely on the quota of one of the existing Macau casino operators. It currently collaborates with SJM Holdings Ltd in relation to table quota.

In its March 23 filing, Macau Legend stated that “the additional gaming tables will increase the gaming capacity of the group and support the current Macau Fisherman’s Wharf redevelopment.”

In a prospectus for a global share offering in 2013, Macau Legend said it was planning up to three new hotels for a revamped Fisherman’s Wharf. In the document, the company also said: “…DICJ advised us and SJM in writing on 7 December 2012 that the measures taken by the Macau government to limit the number of gaming tables in September 2011 [sic] will not be an obstacle to the request…for operating up to 500 tables in total.”