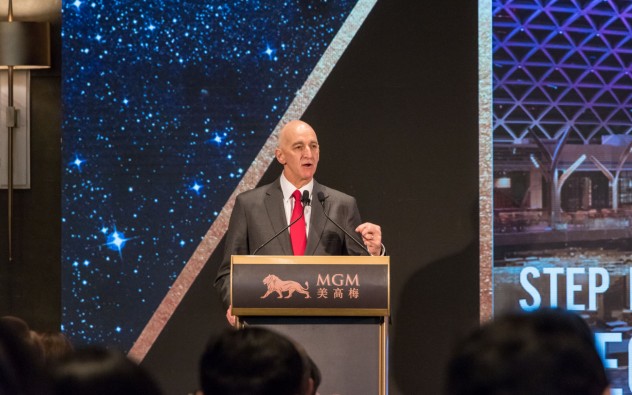 MGM Cotai, the second property developed by Macau casino operator MGM China Holdings Ltd, opened its casino and some other facilities to the public on Tuesday night.

Crowds gathered at the entrance of the new casino resort, waiting for the door to open at 7.30pm. On the main floor of the casino, minimum bets on some live-dealer baccarat tables were as low as HKD300 (US$38.35), while those in the premium mass area started from HKD1,000.

At a press event on Tuesday afternoon, the chief executive of MGM China, Grant Bowie (pictured), said he was not going to make any particular commitments regarding the ramp up of business at the firm’s new Cotai property. A number of investment analysts had commented prior to the launch that they expected a relatively leisurely build up of trade, affected by factors including it not having VIP gambling from the outset.

Mr Bowie said: “Every time a new property opens, it normally – you hope – would create an upward inflection in the visitation. But the reality we’ve also seen is that these properties took a little bit longer to ramp up than the previous.” That was understood to be a reference to those Macau gaming resorts that have launched since the downward correction that was seen in Macau’s gaming revenue in 2015 and 2016.

“We have done everything we can and put in place many strategies and tactics, which we believe will allow us to get up to our optimal performance as quickly as we possibly can,” added Mr Bowie, though didn’t go into details on numbers.

Some analysts suggested that the ramp-up of MGM Cotai would be slower than expected due to factors including a lower number of new-to-market gaming tables being allocated to the property under Macau’s table cap policy compared to property launches for some of MGM China’s market rivals.

The MGM China CEO insisted that the 100 new-to-market tables they received from the government for the opening was “consistent with the allocation of all the other new opening [properties]”. But he stated that MGM Cotai “needed more” tables for the new property. The government has said MGM China will be granted an additional 25 new-to-market tables on January 1, 2019.

“We knew that we needed more than [100 new gaming tables]. We then decided – when we looked at our existing [gaming table] inventory – that we could afford to move 77 tables from Macau to give us the number that we have today,” Mr Bowie said, referring to the firm’s first resort, MGM Macau, in the city’s traditional downtown casino district on the peninsula.

Mr Bowie also touched during a launch-day press conference on the issue of possible refreshment of gaming rights for the existing six operators in the market. He said he believed the scenario would be driven by how successful gaming licence holders were “at diversifying and allowing Macau to become more than just a gaming town”.

He additionally stated he believed that MGM China deserved to have its gaming rights refreshed because of “the actions that we carried out” and said that its investment in MGM Cotai demonstrated the firm’s commitment to Macau.

“Clearly, when you have invested US$3 billion, you can’t leave Macau… We are committed to Macau long term,” he said.

The MGM China CEO said that the Macau government had been “clever” in not revealing details regarding the possible refreshment of gaming rights, in order to “make all of [the Macau casino operators] work harder, do more and be more effective, and try to deliver on that strategic transformation that the government has set down”.

Analyst Grant Govertsen from brokerage Union Gaming Securities Asia Ltd said that by opening just before Chinese New Year, MGM Cotai was able to capture the upside of the market.

“There is no time like now to get everything going… [MGM China] has been able to learn from some of the trials that had happened at the other Cotai properties and has adjusted accordingly,” he told local media on the sidelines of the MGM Cotai opening gala.

The analyst added: “I think [MGM Cotai] is going to be able to ramp up just as quickly as – probably quicker than – other properties here on Cotai.”

FBM, a maker of casino slot machines and an international specialist in electronic bingo machines, is to launch its “Jin Qián Link” slot product at Global Gaming Expo (G2E) 2022 at the Venetian... END_OF_DOCUMENT_TOKEN_TO_BE_REPLACED