No decision yet on tables for Wynn Palace, Parisian: govt 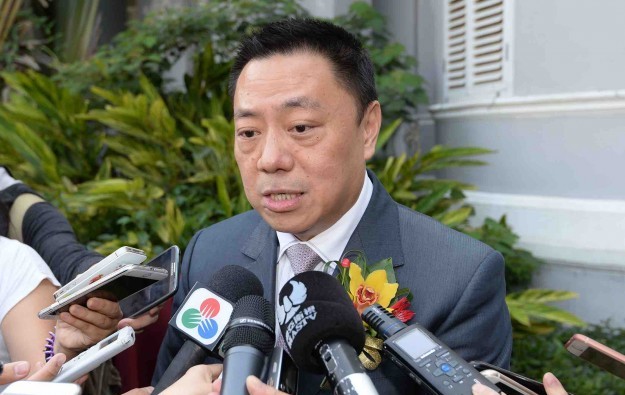 The Macau government has not yet decided on the number of new-to-market live-dealer gaming tables it will grant casino resorts Wynn Palace and Parisian Macao respectively, said on Friday the city’s Secretary for Economy and Finance, Lionel Leong Vai Tac (pictured in a file photo).

Mr Leong’s comments were made just hours after Wynn Resorts Ltd – the parent firm of Macau-based casino operator Wynn Macau Ltd – said it might receive only 100 new-to-market live-dealer casino tables for the launch of Wynn Palace. The firm added it expected the property to be granted additional tables in the post-opening period.

“We received applications just recently and we are going through some analysis process; once I know about the result, definitely I will [announce] the result” of the table allocation for Wynn Palace and Parisian Macao respectively, Mr Leong told reporters on Friday at the sidelines of a public event.

“We are still going through the analysis process; so, it is very difficult for me to give you any accurate figures [regarding new table allocations],” he stated, quoted by Radio Macau.

“Please, give me a few days,” Mr Leong added.

A number of investment analysts expect the Macau government to apply to Wynn Palace and Parisian Macao the policy employed with, respectively, the opening of Galaxy Macau Phase 2, developed by Galaxy Entertainment Group Ltd; and with Studio City, majority owned by Melco Crown Entertainment Ltd. This would see the government granting Wynn Palace a total of 250 new-to-market tables, but allocated in phases.

Sands China chairman Sheldon Adelson said on Monday that the firm did not know yet how many new-to-market live gaming tables it would be granted by the Macau government for the casino at Parisian Macao. “We have… tables from other properties that we can move over,” he said, in a conference call with investment analysts, following the announcement of the second quarter results of Las Vegas Sands.

He wrote in a Friday note: “Yes, 100 tables would represent the lowest day-one allocation (150 to Galaxy [Macau Phase 2], 200 to Studio City), but perhaps not surprising given the environment.”

Mr Govertsen added: “While we would have liked to have seen a larger estimated allocation (150 or 200 [tables]) the fact that management expects 100 tables does not cause us to revise our expectations for Wynn Palace or Wynn [Macau casino in the] peninsula. An allocation of 100 tables to Wynn Macau is only likely to potentially result in a pinch on the busiest day of the busiest holiday but otherwise shouldn’t be an issue.”

The imminent return of package tours from mainland China will not only help boost Macau’s tourism businesses, but is also expected to help casinos gain more foot traffic in their mass gaming... END_OF_DOCUMENT_TOKEN_TO_BE_REPLACED