No firm opening date for Parisian Macao yet: LVS chairman 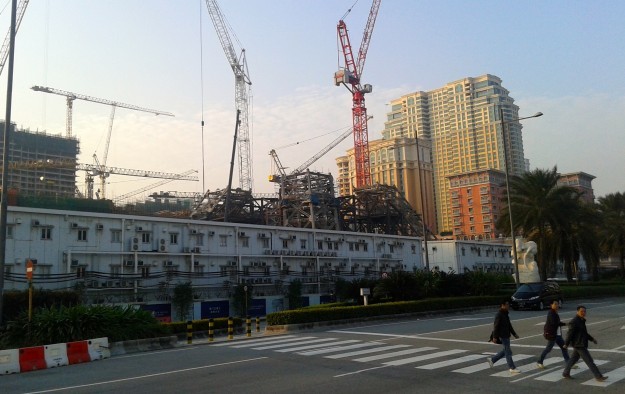 The opening of the Parisian Macao casino resort in Macau will be “some time” in 2016, said Sheldon Adelson, chairman of Las Vegas Sands Corp, speaking on the firm’s fourth quarter 2014 earnings call on Wednesday.

Deutsche Bank AG analyst Karen Tang, based in Hong Kong, said in a note on Thursday the latest commentary was “a departure from ‘late 2015/early 2016’ mentioned in previous calls.”

In October, senior management said the US$2.7 billion property from Las Vegas Sands’ local unit Sands China Ltd, was likely to have a soft opening – of hotel rooms only – in November or December 2015, and a full opening, including the casino, in March 2016.

Mr Adelson indicated on Wednesday’s call that allocation of labour could be an issue affecting the timetable. Macau has a shortage of local labour in many business sectors, and operates a quota system for firms that want to import non-resident labour.

The Las Vegas Sands chairman said regarding the Parisian Macao: “We don’t have an opening date yet. It will be some time in ’16. The question also comes up as to whether or not there’ll be a partial opening, rooms and some restaurants and maybe entertainment. But there’s a new government that was just installed about a month ago, and I’m going over there this coming week to talk to the new government and find out what their intentions are vis-à-vis the components that we need to open, such as construction labour. And we’re shuffling around our construction labour.”

Mr Adelson added, referring to a fourth hotel tower at Sands China’s property Sands Cotai Central, opposite the Parisian Macao site: “ Once we finish the St Regis building, we’ll move some labour over to the Parisian. And we’re also looking where we could… delay other capex [capital expenditure] to existing properties so we could use those [non-resident worker] blue cards, the equivalent of the U.S. green cards.”

Mr Adelson added he was keen to complete the Parisian and what the firm described as its “more than 3,000” hotel rooms as quickly as possible. That was in order to assist the government in its aim of diversifying the local economy away from a focus on casino gambling to more general tourism, said the entrepreneur. The Parisian will feature a scale replica (pictured under construction) of the Eiffel Tower, the most famous landmark in the French capital Paris.

The chairman stated: “I’m going to point that out to them [Macau officials] that we can’t expand on those areas that they really want as opposed to the gaming… when we don’t have enough labour. We do have the permits to complete all the property. And we’re going to do our best to finish it as quickly as possible.”

Sands China announced on January 23 that Mr Adelson would take over as chief executive of the Macau operating unit when the current CEO Edward Tracy retires on March 6.

Mr Adelson was asked on the call whether Las Vegas Sands might seek another internal or external candidate as Sands China CEO.

The chairman replied: “Well, it’s sort of an internal political issue. The CEO title is carried with it, and a separation of Sands China from its major shareholder in the last several CEOs that we’ve had there. So rather than risk that happening again, I’m taking the title of CEO, and I’ll take the responsibility of a CEO. And we’ll have a president and a COO [chief operating officer].

Mr Goldstein said on Wednesday’s earnings call in response to a question on table allocation for the Parisian Macao: “We do hope the government will honour our request for the [gaming] tables at the Parisian.”

A investor presentation accompanying the earnings call, said that the Parisian will have capacity for up to 450 gaming tables and 2,500 slot machines and electronic table games.