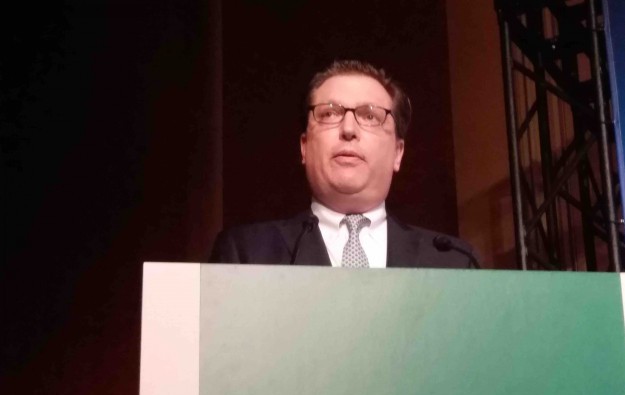 If VIP gambling promoters – also known as junkets – were to be excluded from the Japan casino market, it would “not be a deal breaker” for casino operator Melco Resorts and Entertainment Ltd.

So said Geoffrey Davis (pictured), a senior group executive of the firm who is also chief executive and representative director of Melco Resorts and Entertainment Japan Ltd, the unit set up to pursue one of what are likely to be an initial three casino licences in that country. He was speaking to GGRAsia on the sidelines of the Japan Gaming Congress in Tokyo on Thursday.

In the Macau casino market, where the Melco Resorts group is one of six incumbent operators, VIP play accounts for around half of all casino gross gaming revenue.

But Mr Davis told us that were VIP junkets not to be permitted in Japan by the country’s lawmakers, it “wouldn’t change” the firm’s commitment to Japan. “[It] isn’t a deal breaker – absolutely not,” he stated.

The executive added: “We actually have quite a strong VIP business that we call premium direct business, and the idea of working in Japan without junkets is manageable to us. In fact we haven’t seen anything in the legislation that changes our longstanding commitment to Japan.”

He also commented on the firm’s proprietary MelGuard system – for making biometric checks at locations with limited or privileged access – in relation to casino entry.

Japan’s governing parties have indicated they favour using the national government’s My Card identity document issued to citizens, as the way of verifying casino entry for locals.

Mr Davis said: “Our system can incorporate My Card and biometrics for access control. It [our system] has lots of flexibility, but it already anticipates using My Card.”

He told GGRAsia: “We’ll continue to watch the legislative process patiently, and see how that process ends… But we’d be very honoured if we had the opportunity to be chosen here in Japan. “

Mr Davis had earlier told conference delegates in a presentation that “Melco’s strength is its focus on premium customers”.

He added: “Not only are we able to deliver customers from the region – specifically China – but we are also to deliver the right kind of customers to Japan.”

Melco Resorts’ CEO said last week that he expected a bidding process for a casino licence in Japan to start by the “end of next year” at the earliest.

The imminent return of package tours from mainland China will not only help boost Macau’s tourism businesses, but is also expected to help casinos gain more foot traffic in their mass gaming... END_OF_DOCUMENT_TOKEN_TO_BE_REPLACED