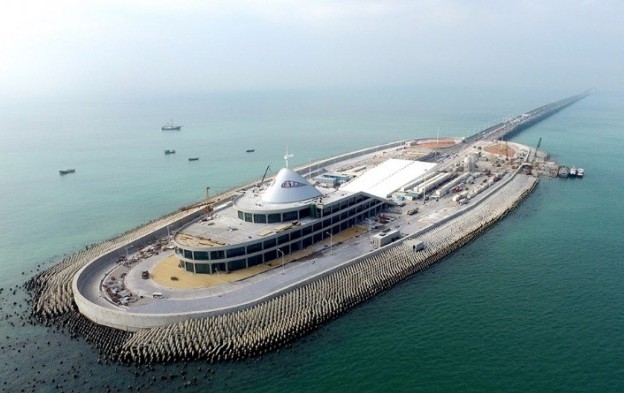 It is unlikely that the opening of the Hong Kong-Zhuhai-Macau (HKZM) Bridge (pictured in a file photo) will bring an immediate boost to casino business for Macau gaming operators, say several investment analysts, citing complexity around the rules about who can use it.

Vitaly Umansky of brokerage Sanford C. Bernstein and Co Ltd, explained to GGRAsia that the notion tourists to the region would be able to drive directly from Hong Kong International Airport via the bridge to a casino resort in Macau – somehow avoiding immigration formalities upon leaving Hong Kong’s air hub – “does not look like it is happening any time soon”.

The relevant local authorities have proposed a quota system covering the number of bus operators and bus services that can use the bridge, and a quota system on the number of vehicles registered either privately or to companies in either Macau or Hong Kong, that are permitted to drive on it. In Macau’s case, only a maximum 600 permits will be issued for private or company vehicle travel to and from Hong Kong.

Additionally, despite Hong Kong and Macau each being Special Administrative Regions of the People’s Republic of China, border formalities are still maintained between the two places, and will apply to travel via the bridge.

Rather, Sanford Bernstein’s Mr Umansky believes the benefit stemming from the opening of the bridge to traffic depends on the actual door-to-door travel time involved.

“I can envision a shift of low-end tour groups – that pass through Hong Kong on the way to Macau – to using the bridge versus the ferry due to lower cost,” said Mr Umansky.

He added: “Until the Hong Kong International Airport to Macau transit becomes convenient – more so than is currently contemplated – I do not foresee a major impact from the bridge.”

It has been reported that the HKZM Bridge is likely to open to traffic this year, but the precise date is still to be announced.

Grant Govertsen, an analyst at Union Gaming Securities Asia Ltd, said there would be “no discernible impact on GGR [gross gaming revenue] and non-gaming revenues, for the time being”. This was because, he said, “visitation trends aren’t going to change over the short term” even once the bridge is in operation.

He nonetheless views the bridge as a long-term positive, particularly as it relates to the meetings, incentives, conferences and exhibitions (MICE) industry in Macau.

“What Macau hasn’t had is easy access to Hong Kong’s airport, and the bridge opening is a game-changer in that respect,” he told GGRAsia.

The large amount of MICE space at the Venetian Macao property – run by casino operator Sands China Ltd – and that proposed for Galaxy Entertainment Group Ltd’s Galaxy Macau Phase 3 and 4 development, would in likelihood herald “a meaningful shift” in certain midweek travel patterns as more event planners move their gatherings to Macau, according to Mr Govertsen.

Spanning 55 kilometres (34 miles), the HKZM Bridge is reportedly the longest sea-crossing bridge in the world.  There have been claims it will slash journey times between Hong Kong, Zhuhai and Macau, putting them all within an hour’s commuting time of each other.

Research led by Alex Bumazhny, senior director of corporate finance at ratings agency Fitch Ratings Inc, stated that the HKZM Bridge would benefit Macau’s gaming market, despite difficulties in quantifying the extent of that.

“For day-trippers, the ability to trim travel time will boost potential time allocated to gambling. More cost-efficient travel options may also result, that would also benefit the mass market,” said the report.

Deutsche Bank AG said in an April memo that it was raising its growth estimates – for second-half 2018 into full-year 2019 – regarding Macau mass-market gaming revenue, by 5 percentage points, to 13 percent year-on-year. It said the revision was to account for the launch of the HKZM Bridge.

China has moved one step closer towards reopening, by relaxing some its Covid-19 control measures, with most infected people now able to quarantine at home rather than in state-sanctioned... END_OF_DOCUMENT_TOKEN_TO_BE_REPLACED