No new gaming tables for Morpheus this year: Macau govt 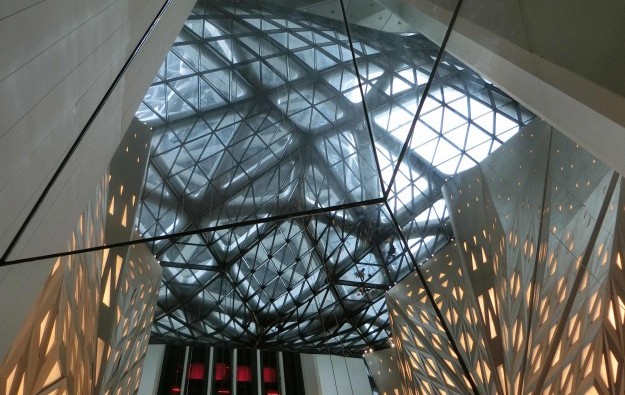 Morpheus, a new US$1.1-billion hotel at the City of Dreams Macau casino resort, has not been allocated any new-to-market live-dealer tables by the Macau government for its official opening on Friday (June 15), or for the whole of the rest of this year. The government will consider next year whether to give it some fresh table allocation.

The news was confirmed in an email to GGRAsia on Thursday from the local casino regulator, the Gaming Inspection and Coordination Bureau – a body also known as DICJ – in response to an enquiry from us.

Referring to Melco Resorts and Entertainment Ltd, the promoter of City of Dreams Macau and of Morpheus (pictured), the gaming bureau stated: “The Macau SAR government has granted approval to the respective gaming concessionaire to transfer 40 gaming tables (not including slot machines) from its other casino properties to Morpheus in 2018.”

It added: “Next year (2019), the Macau SAR government will study whether it will allow the gaming concessionaire to add new gaming tables to Morpheus.”

Most of the recent new openings in Macau of large-scale casino resort facilities have been granted new table allocation by the government. Before MGM China Holdings Ltd opened the HKD27-billion (US$3.4-billion) MGM Cotai casino resort in the city in February this year, the Macau government said it was granting it 100 new tables initially, and an additional 25 new-to-market tables on January 1, 2019.

The regulator said the decision regarding Morpheus was based on keeping to Macau’s policy of capping the number of new-to-market live-dealer tables.

“When reviewing the application for gaming tables, the Macau SAR government has strictly adhered to the principle of limiting the number of gaming tables to not exceed a 3 percent annual compound growth rate for 10 years starting from 2013.”

The body added: “Under this principal, a combination of factors will be considered when reviewing the gaming table application.” This combination included, said the gaming regulator, referring to a Macau government policy aspiration, “the amount of non-gaming facilities, whether it will promote Macau as a ‘World Centre of Tourism and Leisure’, and if it will help to improve the quality, health and diversification of the Macau gaming industry.”

Lawrence Ho Yau Lung, chairman and chief executive of Melco Resorts, had several times recently mentioned in interviews what he considered the iconic nature of Morpheus, a building designed by the late, celebrated architect Zaha Hadid, and how it would help create a new image for Macau.

The regulator added in its Thursday evening statement: “It must be reiterated that in order to prevent the gaming concessionaires overemphasizing the development of gaming, and at the same time to encourage them to increase their investment in non-gaming, the Macau SAR government has continuously implemented different measures.”

These included, the regulator said, “guidelines, communication and approval of gaming tables etc,. to drive the gaming concessionaires to develop adequate non-gaming facilities, enriching the inner qualities of tourism and increasing local employment.”

Notwithstanding the aspirations for non-gaming tourism expressed by the local government and by Mr Ho, Morpheus houses a gaming floor and private “gaming salons” that are designed for villa guests, GGRAsia learnt from a guided visit on Thursday ahead of the hotel’s grand opening on Friday.

An in-house gaming club brand of Melco Resorts – Li Ying Club – is on the second floor of the new hotel, according to on-property signs seen by GGRAsia. According to guidance from Melco Resorts’ representatives on the tour, the luxury hotel also houses some private gaming areas, namely eight gaming salons that are connected to six of the villas.

Gaming services at these private salons can only be made available upon a client’s request. Such requests can be lodged either by Li Ying Club and by outside junket firms. But Li Ying club has priority in bookings, according to guidance we were given during the tour.

“It’s rare, even in the world of luxury, when a project of this scale maintains a focus on details to the level found here on Morpheus. It’s a game changer for Macau, a new benchmark for integrated resorts, and a perfect example of how Melco always does things differently,” said property president of City of Dreams Macau, David Sisk, in prepared remarks contained in a company press release on Thursday.

At a press conference on May 15, CEO Mr Ho had expressed the hope that the Macau government could grant the firm new gaming tables for the Morpheus tower.

Morpheus offers over 770 guest rooms, suites and villas; the property also houses an in-house spa, speciality restaurants, an art gallery, a retail space of 1,200 square metres (12,900 sq feet) and a “sky pool” that is 130 metres above ground. But it is unclear which of the facilities at this new hotel tower are ready for operation for its Friday launch. No one from Melco Resorts’ management took part in the Thursday tour.

The liquidity of casino group Las Vegas Sands Corp is “strong”, with over US$6.4 billion of consolidated cash and nearly US$3.5 billion of undrawn revolving credit facility capacity, said a... END_OF_DOCUMENT_TOKEN_TO_BE_REPLACED