No news on licence refreshment in Macau policy address 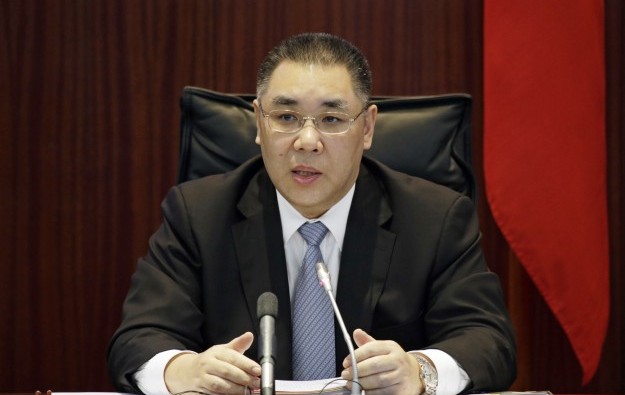 Macau’s Chief Executive, Fernando Chui Sai On (pictured), delivered on Thursday the local government’s policy address for 2019, but the city’s leader provided no guidance regarding what will happen in the run up to when the licences of the six current Macau casino operators expire.

“Taking into consideration that the existing gaming concession contracts expire in either 2020 or 2022, we will strengthen the studies on this matter, and garner the community’s opinion about this issue,” Mr Chui said during his policy address.

In a press conference following his policy address speech, Mr Chui was asked about the casino licence refreshment process for at least two times, but he provided no additional concrete detail.

“Before the licences expire by 2022, we will be launching the tender process. Regarding those licences that expire two years earlier [2020], we’re studying how to deal with it,” he said. “There is still some time to go before 2020 and 2022. We will inform the public about this matter in an open and transparent manner.”

In the previous policy address, delivered in November 2017, Mr Chui had said that mid-2018 would be an “appropriate” time to provide more details regarding any extension of gaming rights for Macau’s current gaming concessions and sub-concessions.

The Macau government has commissioned at least two studies on the possible development of the city’s gaming sector in the period between 2020 and 2030, confirmed in December last year the city’s Economic Bureau in response to enquiries from GGRAsia. The studies were to be completed by the third quarter of 2018, but so far no information on the respective results has been made public by the government.

In May 2016, the Macau government published what it called a “mid-term” review of the local gaming industry. It amounted to 254 pages in the Chinese version. Some industry commentators had suggested prior to its publication that it might give some clues about the industry landscape after expiry of the current concessions. But the published document shed little light on whether the existing concessionaires might be allowed to stay in the market after the expiry of their current rights.

According to the current legal framework, a new public tender process should occur at the expiry of the current rights.

The first two casino licences to expire, namely in 2020, are those held respectively by SJM Holdings Ltd and MGM China Holdings Ltd. Ambrose So Shu Fai, chief executive at SJM Holdings, confirmed in June the firm’s intention to seek a two-year extension for its Macau gaming concession.

He said at the time the reason was to allow the firm to compete for fresh Macau gaming rights “at the same pace” as the four other gaming operators in the city. They see their current rights expire in 2022.

During Thursday’s address, Mr Chui said the Macau government would continue to promote in 2019 inclusion of more non-gaming elements in the city’s casino industry. He also said local authorities would continue to push casino operators to procure more services and products from local small- and medium-sized companies.

Mr Chui said his administration would also “strengthen supervision of junket operations” and continue to conduct audits on junket activities.

According to the policy address document presented by Mr Chui, the Macau government would continue to “strictly assess” applications for the importation of foreign workers based on prevailing economic conditions, and encourage large-scale enterprises – including the city’s casino operators – to hire a greater number of local workers.

The Macau government wants the share of locals working in middle- and upper-level management positions in the city’s casino industry to remain above 85 percent of the total, said the document.

Some Macau casinos visited by GGRAsia on Thursday, actually had tables that were closed, notwithstanding strong consumer demand during Chinese New Year (CNY). The reasons for some tables being... END_OF_DOCUMENT_TOKEN_TO_BE_REPLACED