No restrictions on building casinos in Coloane: Macau govt 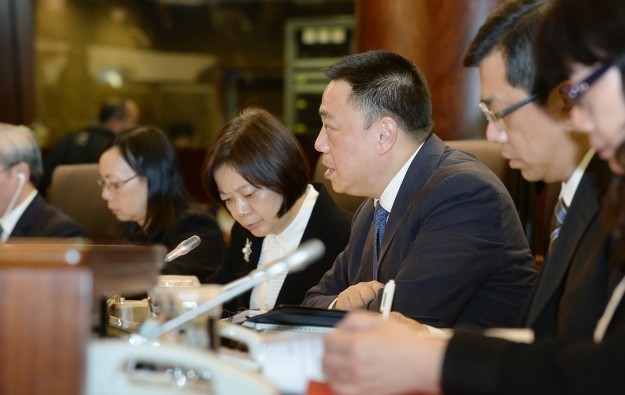 Macau’s Secretary of Economy and Finance, Lionel Leong Vai Tac (pictured centre), said there are no restrictions – in existing legislation – that bar casinos from being built in Coloane, an area next door to Cotai. He added however that the government has received no such request so far.

On Monday, speaking to members of the territory’s Legislative Assembly, Mr Leong additionally said that if the government were to receive a request for such a project, the views of Macau residents would be heard before any decision was made.

“There is nothing prohibiting setting up casinos in different areas of Macau. I cannot say that in a certain area there are no casinos. In the future, if there is such a request, we will take into account several aspects, including listening to society’s opinions”, Mr Leong said quoted by the Portuguese channel of public broadcaster Rádio Macau.

“If society believes certain areas should not have casinos, then, we will have to change our legislation,” he added.

Secretary Leong was answering an enquiry by legislator Au Kam San. Mr Au mentioned there were hotels planned for Coloane – one of them being the Louis XIII hotel – and that developers have expressed the intention to include gaming amenities.

Hong Kong-listed Louis XIII Holdings Ltd is currently building an hotel scheme called Louis XIII, which it says in filings is expected to have a casino with a total of 66 gaming tables. In November the scheme was described as a US$1.1 billion project.

In his enquiry, Mr Au pointed out that Coloane is the only “pure land” in the city in which there are no casinos. “Will the Macau government continue to defend this policy, preventing casinos spreading to Coloane, which is Macau’s last ecological green area?” he asked.

Legislators also voiced their concerns about the possibility of casinos being allowed in areas near the public housing complex of Seac Pai Van in Coloane.

Secretary Leong reiterated that the government has received no formal request from a Macau gaming concessionaire for a casino in Coloane. In June, Mr Leong had said that only the six licensed casino operators can make requests for casino facilities and casino tables.

The imminent return of package tours from mainland China will not only help boost Macau’s tourism businesses, but is also expected to help casinos gain more foot traffic in their mass gaming... END_OF_DOCUMENT_TOKEN_TO_BE_REPLACED