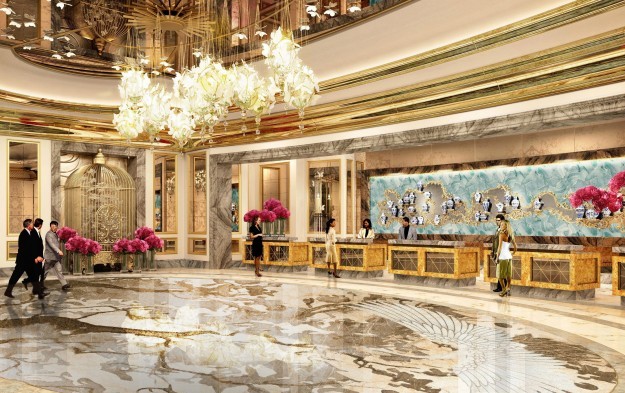 The chief executive of Macau casino operator SJM Holdings Ltd, Ambrose So Shu Fai, denied to local media on Thursday that the company had seen an increase in the overall investment budget for its under-construction casino resort Grand Lisboa Palace on Cotai.

Mr So also noted the company did not foresee any “major delays” to the scheduled completion and opening dates for the project.

SJM Holdings had announced in its 2016 results filed in February that the Cotai scheme now had an estimated total project cost of approximately HKD36 billion (US$4.6 billion). The company previously mentioned an investment of HKD30 billion to build the property.

“There is not an increase in the investment budget [for Grand Lisboa Palace],” Mr So told media on the sidelines of an event to launch a company recruitment centre on Macau peninsula.

“The HKD30 billion we referred to before mainly [represented] the cost of construction and furnishings,” Mr So added.

“The HKD6 billion is the cost of other related supporting facilities and the pre-opening expenses… So when we add all these sums together, we have the amount as HKD36 billion,” SJM Holdings’ CEO stated.

Mr So additionally said the company did not anticipate any “major delays” in the scheduled completion and opening for Grand Lisboa Palace.

SJM Holdings had stated in its 2016 results that it expected construction of Grand Lisboa Palace to be completed “around the end of 2017, for opening in the first half of 2018”.

“Our dates are still all on schedule. Are there any major delays? We didn’t see any,” Mr So remarked. He added: “The most important [thing] is that we can have an appropriate [construction] labour supply, as well as a quota of imported labour.”

The CEO said: “We have quite good news now: as the other casino operators have finished their [Cotai] construction projects, the labour [supply] conditions are not really that tense now.”

But he noted: “We still hope that the government…can understand we need more imported labour to finish the work on time. In this respect we have been exerting much effort in communicating with the government.”

For the Cotai scheme, Mr So noted on Thursday that the company intended to apply – under the Macau government’s table cap – for “400 new live gaming tables”. The firm has said previously in filings the resort has capacity for 500 tables and 1,000 slot machines.

“The number of gaming tables granted is ultimately a decision by the government,” said the CEO. “But we will also assess market demand then [at launch time]. We can allocate gaming tables from the other properties of ours. Through this we can sort out our own resources, and enhance the efficiency of our gaming tables,” stated Mr So.

Angela Leong On Kei, an executive director of SJM Holdings and and a Macau legislator, also spoke at the recruitment centre opening. She said the centre would be the channel for “over 10,000 employment opportunities” at Grand Lisboa Palace and the soon-to-open 130-room Hotel Jai Alai, an SJM Holdings property next to the firm’s Casino Oceanus on Macau peninsula near the Outer Harbour Ferry Terminal.

The firm didn’t clarify how many posts at Grand Lisboa Palace would be filled by redeployment from other parts of the group and how many were new-to-market jobs.

Nor did the company give a date for the opening of Hotel Jai Alai. The casino portion of the Jai Alai complex – a refurbished facility rather than a new-to-market one – started operation in December, Mr So did confirm at the Thursday event.

“The [Jai Alai] casino is an expansion of Oceanus. For the Jai Alai hotel, there are still the licensing issues and government inspection to be done,” Mr So briefly stated.

The SJM Holdings executive has also commented on the Macau government’s proposal that the city’s casinos be given until the start of 2019 to implement more stringent smoking lounge standards that have been proposed by local officials. The deadline is included in a revised draft bill dealing with smoking inside casinos.

The proposed enactment date for the bill is January 1, 2018, with casinos given 12 additional months to adapt to the new standards for smoking lounges

That timeframe is “achievable” for the city’s casino operators, Mr So said. The SJM executive also said that if smoking lounges are allowed on VIP gaming floors, as the government has suggested, such a system should not cause “huge inconvenience” to VIP gamblers who are smokers.

Most of Macau’s casino operators are likely to generate positive free cash flow in the first quarter, given the robust recovery level of mass-market gross gaming revenue (GGR) in January, relative... END_OF_DOCUMENT_TOKEN_TO_BE_REPLACED