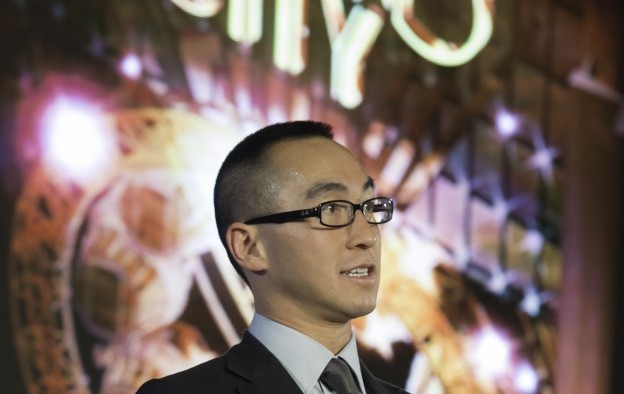 Not having junket rooms at Studio City’s casino was a “business decision” driven mainly by the size of the gaming property’s new-to-market table allocation from the Macau government, said a co-chairman of its main promoter Melco Crown Entertainment Ltd on the official opening day on Tuesday.

Asked whether the Macau government had asked for no junket rooms at the US$3.2-billion Studio City as a condition of it granting a 250-table allocation, or whether it was the company’s own choice, Lawrence Ho Yau Lung, co-chairman and chief executive of Melco Crown – accompanied at the event by his co-chairman James Packer – told a press conference: “It was a business decision.”

It is the stated policy of the Macau government and China’s central government to broaden the base of Macau’s whole economy, and to have more non-gaming attractions in the city’s tourism sector.

The entrepreneur added that once it became known that Studio City was to get a new-to-market allocation of 250 tables – 200 for use from when the casino opened on Tuesday afternoon and a further 50 from January – “it was a no brainer for us that it was going to be all mass [table gaming]. If it was 400 tables [in the allocation] maybe there would have been a very small portion for VIP [gambling]. But we are where we are.”

An investment analyst – who asked not to be identified – had previously told GGRAsia that as margins on VIP table gaming in Macau were normally thinner than on mass-market table games, it might make sense for the company to retain any VIP business at its 100-percent owned properties City of Dreams Macau and Altira Macau, rather than to develop such business at Studio City, in which it has only a 60 percent interest.

Mr Ho indicated during Tuesday’s press conference that moving beyond VIP business was a group policy.

“If you look at Melco Crown as a company, we have steered away from VIP a long time ago. We are the second least reliant on VIP out of the six concessionaires [operating in the Macau market]. VIP EBITDA [earnings before interest, taxation, depreciation and amortisation] contribution to our entire group before even Studio City opens is less than 10 percent,” said Mr Ho.

“We really understood what the government wanted in terms of more diversification in the market,” said the entrepreneur.

“With the support from James and the board, we have tried something new again,” said Mr Ho.

Referring to the company’s early forays into non-gaming attractions at its original Cotai flagship resort, Mr Ho stated: “At City of Dreams, we did The House of Dancing Water and some live shows, but with Studio City, it’s really been about more interactive attractions that the entire family can share in.”

What Studio City will lack in VIP junket rooms it made up for on Tuesday in Hollywood VIP glamour, with personal appearances at the opening day by actors Robert De Niro and Leonardo DiCaprio, as well as director Martin Scorsese and producer Brett Ratner. The first three celebrities – along with actor Brad Pitt, who was unable to attend – star in a 15-minute short film called ‘The Audition’ that was made to mark the launch.

Mr Scorsese said that the property had its own personality within the promotional film. Mr Ho has described its exterior as Art Deco in style and as having a “steam punk”-style Ferris wheel ride that looks both old and modern.

During the earlier press conference on the business aspects of Studio City, Mr Packer paid tribute to market rival Sheldon Adelson, chairman and chief executive of Las Vegas Sands Corp, for being first to develop a casino resort on Cotai – the Venetian Macao.

“Hats off to Sheldon Adelson. Because he believed in Cotai. The truth is no one else [other than] Lawrence believed in it – and we were able to get two of the best sites in Cotai,” said Mr Packer, referring firstly to City of Dreams, which Melco Crown pursued independently, and secondly to Studio City.

In June 2011, the casino firm paid US$360 million to take over leadership of the Studio City scheme from some previous investors. The project had lain with its foundations part built since 2007 after the original set of investors could not all agree on the funding.

“If you think about it, five [rival] concessionaires and [us being] five years late [to the market]… we shouldn’t be able to get a good site,” added Mr Packer.

Mr Ho stated: “I think ultimately we have been the biggest supporter of the mass business – when you look at all the non-gaming amenities we have invested in. And we strongly believe as a board as well that this is the future of China, because this is the middle class – the rise of the middle income earning bracket… and the rise of the more sophisticated, well travelled customer.”

Mr Ho added: “Since we got that concession in 2006, in the short nine years of our history, we have invested over US$10 billion, and the second most in this market. And I think we are the indisputed top investor in terms of non-gaming attractions.

“With this amount invested we are looking five or 10 years ahead. The Hong Kong-Zhuhai-Macau Bridge will be a game changer. Also with the completion of the Cotai [sic] ferry terminal and light transit rail [sic], Macau will be able to accommodate more than 31 million tourists”, said Mr Ho.

Asked about the plans for the remainder of the Studio City land plot, Mr Ho said: “We have built about two-thirds of the land grant for Studio City… As you know, the interest in Studio City is 60 percent owned by Melco Crown and 40 percent by New Cotai. And so I think our attention and focus have been to open this property the best we can first, and then to have discussions after that on what we ultimately need to do to fulfil the rest of the land grant.”

He indicated that officially the designation was four-star for the purposes of government classification, but that the group was proud to have what he described as the most five-star product classifications from Forbes for the Macau market.

“We are very respectful of the government and their regulations – we have done some things that are pretty innovative from their perspective – so rather than putting them in a difficult position, we will gladly lower ourselves to four-star,” he told the assembled media.

“Crown [at City of Dreams Macau] and Altira are both … Forbes five-star ranking. We have the most Michelin star restaurants on Cotai. So I think from a global standard we are very pleased with the product,” Mr Ho added.

He stated: “Let’s be clear, Lawrence is the CEO of this company. But if you look back 10 years ago it was a different company.”

He added, referring to the purchase for US$900 million of a Macau gaming sub-concession from Las Vegas gaming entrepreneur Steve Wynn of Wynn Resorts Ltd in 2006: “I think I was helpful in getting the sub-concession from Steve Wynn, I think I was helpful in the 2008 financial crisis when we refinanced. I hope I’ve been helpful in the development of this resort,” he added, referring to Studio City.

“But I think the most important thing in a political sense is that Lawrence and I are a role model JV [joint venture] for how an Australian company and a Chinese company should work. And there aren’t many,” added the Australian businessman.

“The other thing I would say is that… we have reinvested every cent. We have taken maybe 30 million bucks [U.S. dollars] in dividends – something like that.

“So as a partner that believes enormously in Lawrence and thinks Lawrence is the best partner possible and a great CEO… what we have said is we want to keep on reinvesting in this market,” stated Mr Packer.

His partner Mr Ho added: “In the gaming world – with the egos involved – there aren’t many partnerships. And for a partnership to have worked as well and as long [is an achievement].

“Ten years ago we didn’t have any systems [for running the business]. We didn’t even have a standard operating procedure. And now the company is system-based – which we are very proud of. So it has grown from nothing…”

“To what it is now,” added Mr Packer, completing his co-chairman’s thought and his sentence.