‘No surprises’ in any Cambodian gaming law: NagaCorp 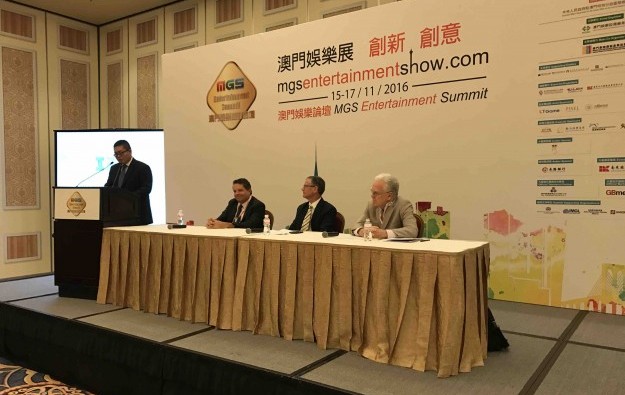 There should be “no surprises” in a bill to regulate the management of the gaming industry in Cambodia, said the chairman of NagaCorp Ltd, a casino operator in that country. The bill could be ready by the end of this year or early next year, according to Tim McNally (pictured right).

He was speaking during a conference panel on Wednesday called “New Frontiers in Development and Operations” held at the Macao Gaming Show 2016, a casino industry trade exhibition and summit at the Venetian Macao.

“What will come out of it [the Cambodian regulation]? I expect there will be some gaming tax provisions in the law but I won’t speculate… as it still has to be finalised,” said Mr McNally.

NagaCorp runs NagaWorld in the Cambodian capital Phnom Penh, and has a long-running exclusive right to operate casinos in an area within a 200-kilometre (124.3-mile) radius of the city.

Mr McNally said the authorities in the Southeast Asian nation were “mindful that Cambodia needs to maintain its competitiveness” against other major players in the Asian casino market such as Singapore and Macau. He added he was “optimistic” that Cambodia would continue to be a jurisdiction with low tax.

The Khmer Times newspaper last month said that members of the Cambodian government had met with representatives from the gaming sector to discuss the bill. The draft document reportedly proposed the establishment of a committee to regulate the sector.

The newspaper report did not give details regarding the likely tax regime for gaming establishments. Currently casinos pay a flat tax on gaming machines and tables – at a rate negotiated with the operator and typically adjusted upward annually – rather than casinos being required to collect a tax from players on the bets they wager.

Cambodia’s tax takings from the country’s casinos rose 35.5 percent year-on-year to US$37.4 million in the first nine months of 2016, the Ministry of Economy and Finance announced last month, according to Chinese state-controlled news agency Xinhua.

According to local media reports, the Cambodian authorities have been preparing for statutory regulation of the gaming industry since at least 2014, in a bid to attract major casino operators to the country. Mr McNally said his firm had been in regular conversation with the authorities regarding the bill.

The NagaCorp chairman advised casino investors interested in Cambodia – an emerging economy – should keep capital costs “as low as possible” at launch, and then build up their input for the longer term.

Another speaker on the panel, Kevin Clayton (pictured centre), chief marketing officer of Macau gaming operator Galaxy Entertainment Group Ltd, stressed the key to success for gaming resorts across Asia was to have “headline attractions”. He also addressed the importance of a high-quality player reward programme or player recognition programme in order to attract and retain customers.

“People in Asia love services and love being served,” said Mr Clayton. “Galaxy prides itself on its culture, philosophy and services that differentiate it from other competitors… And that happens by training people, leading everyone [in the company] to be aligned with the services you provide.”

The NagaCorp chairman said: “You have to be careful, to show respect and your best efforts to comply [with the laws]… as the policies… [may be] not clear… [and] are up for a lot of interpretation.”

Mr McNally had previously told GGRAsia that his own firm’s exposure to junket players from mainland China was modest.

Most of Macau’s casino operators are likely to generate positive free cash flow in the first quarter, given the robust recovery level of mass-market gross gaming revenue (GGR) in January, relative... END_OF_DOCUMENT_TOKEN_TO_BE_REPLACED