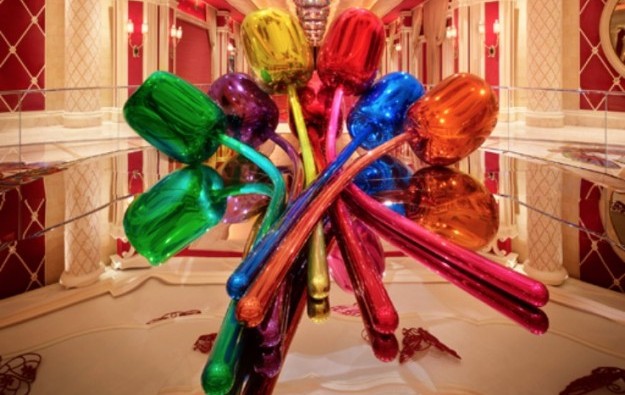 None of the works of art displayed or kept at Wynn Macau Ltd’s two casino resorts in the city are either the personal property of former group chairman Steve Wynn, or of entities controlled by him, the company confirmed in an email to GGRAsia in response to our enquiry.

The company also affirmed that as such, there was no ground for the works’ removal from the properties following Mr Wynn’s February resignation from the Wynn Resorts Ltd group, amid allegations of sexual misconduct spanning decades.

Days before the launch of Wynn Palace in August 2016, Mr Wynn – frequently described in media reports as an avid collector of art – had stated at a media briefing in Macau that the total value of artworks on display at Wynn Palace was over US$100 million.

They included a set of four rare porcelain Qing-dynasty pieces known as the Buccleuch vases and a steel sculpture by Jeff Koons. The latter piece, titled “Tulips”, was purchased for US$33.7 million in a deal between Wynn Resorts (Macau) SA, a subsidiary of Wynn Macau, and Wynn Design and Development LLC, a unit of U.S.-based Wynn Resorts – the latter the parent company of Wynn Macau. The deal was announced in a June 2016 filing to the Hong Kong Stock Exchange.

According to Wynn Palace’s website, the property also has on display several French tapestries from the 18th century, and a monumental vase by U.S. ceramicist Viola Frey.

In a 1998 interview currently carried on the website of Observer Media in New York, Mr Wynn – then running Mirage Resorts Inc – said there were tax advantages in Nevada to buying art out-of-state and then publicly-displaying it in-state. The article also mentioned that in 1997, Mr Wynn had gained a licence as an art dealer.

On Tuesday this week Bloomberg reported – citing people familiar with the matter – that Mr Wynn was planning to sell several works by Andy Warhol and Pablo Picasso with an aggregate estimated value of more than US$150 million, via auctions in May with the Christie’s group.

Mr Wynn’s best-documented brush with the art world was in 2006, when reportedly he accidentally put his elbow through Pablo Picasso’s 1932 masterpiece “Le Rêve,” while showing it to visitors in Las Vegas. The act was said to have immediately knocked US$54 million off the US$139 million asking price he had planned to extract from a buyer. Mr Wynn and his insurers ended up settling out of court on a claim aimed at recouping the difference. In March 2013, it was reported Mr Wynn eventually sold the painting for US$155 million.

The verdict – and eventual sentencing – in the case involving Alvin Chau Cheok Wa (pictured in a file photo) and other defendants linked to the now-defunct Macau casino junket Suncity Group Ltd... END_OF_DOCUMENT_TOKEN_TO_BE_REPLACED