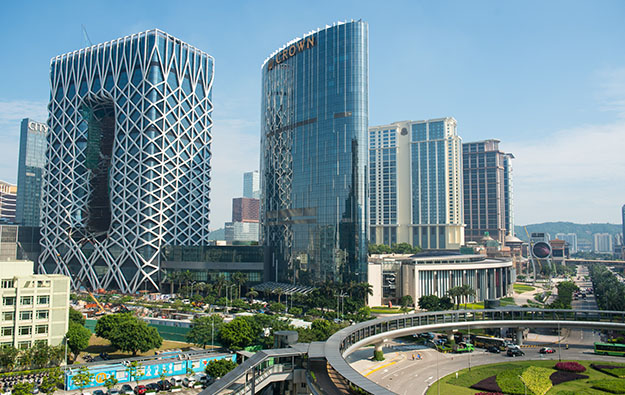 Japanese brokerage Nomura is revising upward its 2017 and 2018 estimates for a key performance indicator at Asian casino developer and operator Melco Resorts and Entertainment Ltd.

The institution’s forecast for Melco Resorts’ Macau 2017 earnings before interest, taxation, depreciation and amortisation (EBITDA) has been raised by 6 percent, and for 2018 by 2 percent.

“In the third quarter 2017, we now expect [Melco Resorts’] Macau EBITDA of US$306 million, or roughly 6 percent higher than the Street [consensus],” said Nomura. It added its forecast was based on expectation of 21 percent casino gross gaming revenue (GGR) expansion market-wide, with Melco Resorts “gaining back the 90 basis points [bps] of mass share that City of Dreams [Macau] lost in the second quarter”.

For 2018, Nomura anticipated some market share loss for Melco Resorts following the launch – possibly in the fourth quarter this year – of MGM Cotai, the new venue from MGM China Holdings Ltd across the road from City of Dreams Macau. But the brokerage said such share loss should be fewer than 100 bps, and thought Melco Resorts’ 2018 Macau EBITDA margin would expand to 26.4 percent, an increase of 40 bps on the EBITDA margin expected for full-year 2017.

The institution added it was increasing its 2017 and 2018 EBITDA estimates for City of Dreams Manila – a property in the Philippine capital that is managed by a unit of Melco Resorts – by US$42 million and US$37 million respectively, following “three consecutive quarters of results upside and the resiliency of junket/VIP demand”.

Nomura said other reasons for being more positive on Melco Resorts included the opening of the Morpheus hotel tower at the  City of Dreams Macau in “first quarter 2018” and which could lead to improved EBITDA performance. Melco Resorts’ chairman Lawrence Ho Yau Lung had mentioned in the firm’s second-quarter earnings call a “first quarter or second quarter” launch for the US$1-billion Morpheus.

“The new tower will have nearly 800 rooms and we’re assuming 25 incremental [gaming] tables,” stated Nomura. Mr Ho mentioned on the earnings call it had space for 50. Under the Macau government’s table cap policy, a new property’s carrying capacity for gaming tables may not be reflected in the new-to-market allocation it receives from the casino regulator.

Nomura noted, referring to complimentary incentives or “comps” offered by the house either directly to players or to junkets: “Melco Resorts already comps over 80 percent of its rooms, which limits its growth potential.” But the brokerage suggested that the addition of Morpheus should lift group EBITDA by US$86 million next year.

Nomura said it was also more positive regarding the extent to which a full ban on tableside smoking at Macau casinos – effective in practice from January 2019 – could affect Melco Resorts.

“One of the main reasons that kept us on the sidelines [was potential for]… a negative 10 percentage point impact to GGR growth at City of Dreams [Macau]. However, offsetting any potential negative smoking ban-related headwinds at City of Dreams are: overall growth in the market; improving performance at Morpheus as the tower [operation] continues to ramp, and possible infrastructure catalysts including the Hong Kong-Zhuhai-Macau Bridge and Macau light rail system helping stimulate demand,” said Nomura.

The institution added that a mooted U.S. listing of a minority stake in Studio City – flagged in August – could result in “unlocking hidden value in the asset”.

Brokerage Sanford C. Bernstein Ltd mentioned in a Monday note the likely positive impact on Melco Resorts’ operations of the Morpheus opening, and four events at corporate level that would be “value creating” for Melco Resorts shareholders if they came to pass: the firm either buying out its minority partners at Studio City, or a “Studio City IPO [initial public offering] at favourable valuation”; the group getting a Japan casino licence; an increase of return of capital to investors; and “restructuring involving merger” of Nasdaq-listed Melco Resorts with Mr Ho’s Hong Kong-listed gaming investment vehicle Melco International Development Ltd.

Paradise Co Ltd, an operator of foreigner-only casinos in South Korea, reported casino revenue of nearly KRW48.65 billion (US$39.8 million) for January 2023, according to a Thursday filing to the... END_OF_DOCUMENT_TOKEN_TO_BE_REPLACED