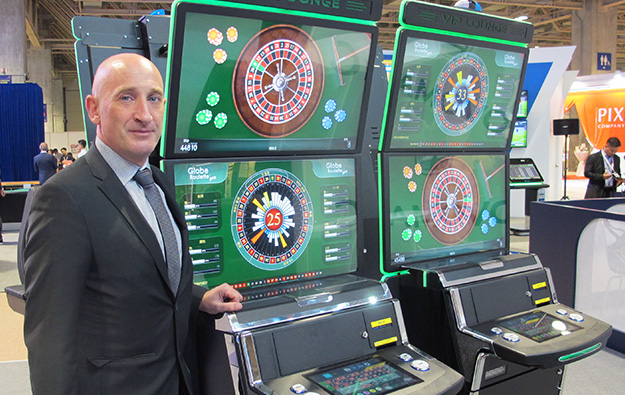 Austrian gaming equipment maker and operator Novomatic AG still has a relatively small presence in Asia but after the announced tie-up with Australia-based slot machine supplier Ainsworth Game Technology Ltd, the combined strength of the companies aims for a higher presence in the market. That is according Jens Einhaus, sales director of Novomatic (pictured).

“Both companies still have a rather small presence in Asia,” Mr Einhaus told GGRAsia. Instead they are represented via distributors. Novomatic’s Asian distributor is a company called Jade Entertainment and Gaming Technologies Inc.

“Our big priority is the U.S. and South America,” Mr Einhaus said. Novomatic is particularly following up developments in Brazil: local authorities there are moving to legalise casino gambling in the country.

Mr Einhaus said: “Our focus was always mainly in Europe and from there we spread. Asia has so far not been on our list of priorities as compared to other markets.”

The Novomatic group operates more than 235,000 gaming devices and video lottery terminals in more than 1,600 outlets, including gaming parlours and casinos. The company is active as a supplier in several gaming segments around the world including casino, lottery, sports betting, online and mobile play.

The Novomatic executive noted that, although Asian markets like Macau and Singapore command large headline gross gaming revenue figures, the actual number of gaming machines available in those markets is relatively low.

There were fewer than 15,800 slot machines in Macau as of September 30, according to the city’s gaming regulator. In the state of Nevada, in the United States, the state-wide number of slots was 10 times bigger, standing at almost 168,000 for the same period, show data compiled by the Center for Gaming Research at the University of Nevada, Las Vegas.

Novomatic however still wants to expand its footprint in Asia, Mr Einhaus said.

“We are doing good business over at Genting Malaysia [Bhd’s Resorts World Genting casino complex]. In Vietnam, our distributor managed to get a couple of good deals. [We are] also in Saipan,” he said, adding that Novomatic also had products placed in the Philippines and Cambodia.

“Our biggest and best market is South Korea, where we are by far the number one performing manufacturer.”

Mr Einhaus said the completion of the Novomatic tie-up with Ainsworth was still pending some regulatory approvals. “We hope to have all that done by the third quarter of 2017,” he stated.

Ainsworth said in a filing in June that its shareholders had approved the sale of 52.2 percent of company founder Len Ainsworth’s shares, to Novomatic. At the time, Danny Gladstone, Ainsworth’s chief executive, described the deal as “an important and exciting point in Ainsworth’s development”.

Mr Einhaus told GGRAsia that “synergies [between both firms] are already being discussed and happening,” including regarding product development.

He was speaking on the sidelines of the Macao Gaming Show 2016, a regional casino industry trade show held from November 15 to 17 at the Venetian Macao.

The Novomatic stand at Macao Gaming Show already featured Ainsworth products. The same will happen during February’s International Casino Exhibition (ICE), an industry trade show held in London in the United Kingdom that is branded ICE Totally Gaming, he stated.

Mr Einhaus said worldwide sales for Novomatic in 2016 had gone up, with good performances in several markets, “especially in Mexico: it is picking up big time now.”

Novomatic posted a “new record” in turnover in the first six months of 2016, the firm stated in an August press release. The gaming manufacturer and operator recorded a turnover of EUR1.09 billion (US$1.15 billion) between January and June, up by 10.8 percent in year-on-year terms.