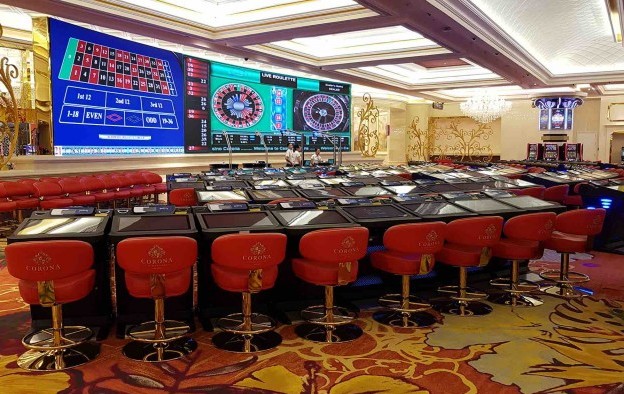 Novomatic AG, an Austrian maker of gaming technology, has announced it is a “premium supplier” to the new Corona Resort and Casino in Vietnam.

A written statement issued on Monday by Novomatic said it had provided the casino – on Phu Quoc island – with a range of gaming terminals, a casino management system and media technology for its casino floor.

The statement said Novomatic and its Australian subsidiary, Ainsworth Game Technology Ltd, supplied the casino with 200 slot machines and 125 electronic table game terminals – or about 35 percent of the slots at the casino.

It said a focus point of the casino floor was a large Novomatic electronic table games stadium (pictured), featuring 125 gaming positions and allowing gamblers to play either baccarat, roulette or sic bo.

Novomatic stated additionally that the aggregate 1,000 slot machines in the casino were managed by its Octavian myACP casino management system and that a Novomatic Media Technologies Absolute Vision system controlled more than 400 television screens and monitors on the premises, along with a custom-built, large-scale LED video wall.

The Novomatic statement quoted the company’s vice-president for global sales, Lawrence Levy, as saying: “The Southeast Asia region is a strong area of growth for Novomatic and we are extremely excited to play a major role in the development of Vietnam.”

A casino cruise brand reportedly controlled by Malaysian entrepreneur Lim Kok Thay is to launch services from Singapore fewer than five months after the Lim family-founded Dream Cruises brand of the... END_OF_DOCUMENT_TOKEN_TO_BE_REPLACED