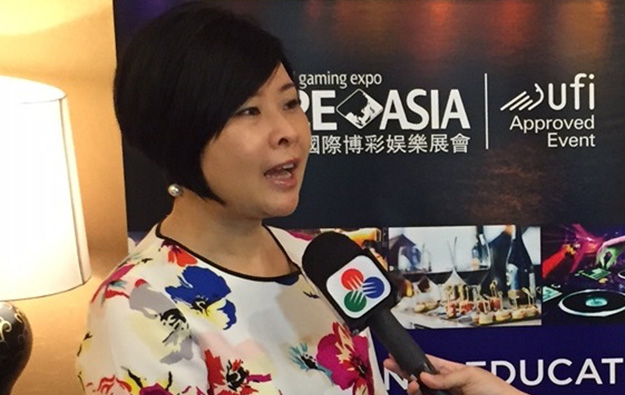 All the major suppliers to the international casino industry – including Novomatic AG Group – will have products at this year’s Global Gaming Expo (G2E) Asia, says one of the event co-organisers.

G2E Asia is an annual casino industry trade show and conference held in Macau. This year’s edition takes place next week, from May 17 to May 19, at the Venetian Macao casino resort.

“We have all the key companies coming back to G2E Asia because this is the most important event in Asia still,” Josephine Lee (pictured), executive vice president of Reed Exhibitions Greater China, told reporters on Thursday.

Novomatic announced in December that over the next three years it would attend only one of the two gaming trade shows held annually in Macau. The firm had said in a release it had decided to commit itself to the industry’s other trade event in the city, the Macao Gaming Show, held in November and organised by the Macau Gaming Equipment Manufacturers Association.

At G2E Asia 2016, Novomatic will not have its own booth, according to a company statement. The firm will be represented on the stand of its Asian distributor Jade Entertainment and Gaming Technologies Inc.

Ms Lee stated that the organisers of G2E Asia had no information to suggest that any of the major casino equipment supply companies would choose to exhibit only at the Macao Gaming Show.

She said: “We have no exhibitor telling us that: no exhibitor. In fact, they [Novomatic] are exhibiting at G2E Asia.”

Casino suppliers and operators in Asia have been looking closely at their costs during the current regional downturn in gaming revenue. Some have privately mentioned potential cuts in spending related to attending and exhibiting at trade shows.

Reed Exhibitions disclosed that a total 180 exhibitors have been confirmed for G2E Asia 2016, a 12 percent increase on last year’s show. More than 40 percent of this year’s exhibitors are newcomers to the event, according to the organisers.

“We are expecting 12,000 visitors [to G2E Asia 2016]. As of today, we have about 5,000-plus pre-registered visitors. All casinos in Asia were covered in that pre-registration visitor number,” said Ms Lee.

The event is celebrating this year its 10th edition. According to the organisers, the exhibition portion of G2E Asia has tripled in floor size since the first show: the 2016 edition will cover more than 9,200 square meters (99,028 sq feet) of exhibition space.

On the conference side, one of this year’s highlights is the participation of Paulo Martins Chan, director of Macau’s casino regulator, the Gaming Inspection and Coordination Bureau. He is to speak on May 18 on the topic “Transformation in changing conditions”.

Some Macau casinos visited by GGRAsia on Thursday, actually had tables that were closed, notwithstanding strong consumer demand during Chinese New Year (CNY). The reasons for some tables being... END_OF_DOCUMENT_TOKEN_TO_BE_REPLACED