NUSTAR exec predicts 80pct revenue via gaming as ramps up 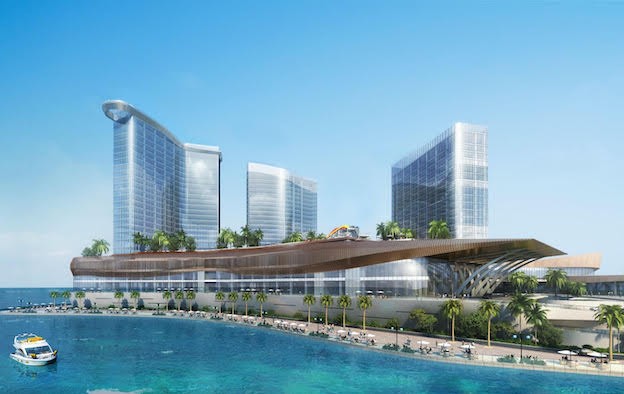 NUSTAR Resort and Casino, a new tourism complex in Cebu in the Philippines, expects as much as “80 percent” of its revenue from gaming as the business ramps up, suggested Trevor Hammond, vice president and officer in charge of gaming and integrated resort operations at the property, in a presentation session during Tuesday’s ASEAN Gaming Summit.

NUSTAR Resort and Casino (pictured in an artist’s rendering) , on Kawit Island, Cebu, mentioned in social media postings in May, its soft launch. The property is the “flagship” project of Universal Hotels and Resorts Inc, Mr Hammond mentioned in Tuesday’s conference session. The latter entity is privately-owned, with business focused on gaming and integrated resort development across the Philippines. It is linked to the Philippine conglomerate Gokongwei Group.

May saw the opening of the Fili Hotel – one of the complex’s three accommodation areas – as well as the casino and three restaurants. Other hospitality and leisure features will be added “over the next 18 months to two years”, said Mr Hammond, a former senior executive in the Macau casino market.

When the project is completed, NUSTAR Resort and Casino could see “80 percent” of revenue coming from the gaming segment.

“Our gaming revenues are going to be about 80 percent [of overall revenue]. The hotels are priced obviously in such a way to support gaming operations because, with only 1,000 keys, most of those rooms will be taken up by our casino guests from international marketing…” said Mr Hammond in response to a question following his presentation. He was referring to the aggregate 1,000 rooms for the three hotels when the resort is fully open.

The complex is to launch later, a Nustar Hotel, and a hotel called Grand Summit, the latter to cater for meetings, incentives, conferences and exhibitions (MICE) travellers, according to Mr Hammond’s presentation. The NUSTAR property is due to have 40 more dining areas, a theatre, two cinemas with 80 seats each, a convention space, a new mall, a “skydeck”, a leisure park and a boardwalk.

“The mall itself and the restaurants do very well,” but in revenue-generation terms could not be compared to the potential of VIP and  premium mass gambling, said the executive. But he added the revenues of non-gaming were “not to be scoffed at”, as an “integrated resort requires all the supporting departments to fulfill its potential”.

The Cebu property has no VIP gambling operation at present, Mr Hammond mentioned. Currently, the casino revenue is split about “50-50″ between gaming tables and slot machines, the NUSTAR executive said during a question-and-answer session after his presentation.

“When we open VIP,” revenue from that segment would overtake that from the existing operation, predicted Mr Hammond. He did not mention a date for the start of a high roller programme.

The imminent return of package tours from mainland China will not only help boost Macau’s tourism businesses, but is also expected to help casinos gain more foot traffic in their mass gaming... END_OF_DOCUMENT_TOKEN_TO_BE_REPLACED