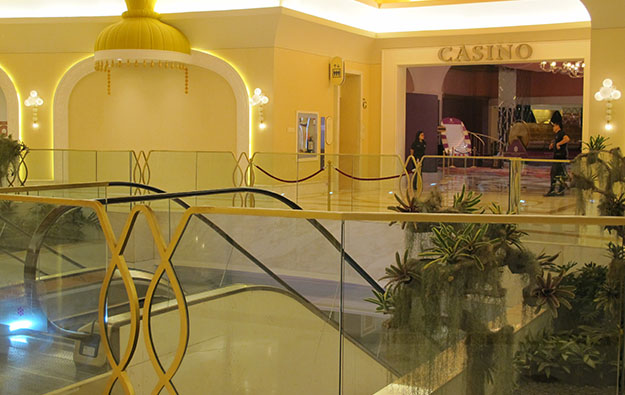 Philippine casino resort Okada Manila (pictured) has a VIP gambling business that has “independence from any Macau VIP operations” and this could aid its sustainability.

That was a suggestion from brokerage Union Gaming Securities LLC in a Tuesday memo summarising its discussions with casino managements during the recent Global Gaming Expo (G2E) casino trade show and conference in Las Vegas, Nevada, in the United States.

The institution covers the stock of Japanese gaming conglomerate Universal Entertainment Corp, which is the parent of Okada Manila’s promoter, Tiger Resort, Leisure and Entertainment Inc.

Union Gaming analyst John DeCree wrote regarding Universal Entertainment: “Company management noted discerning VIP customers and junkets beginning to choose Okada Manila over peers in the market given the size and amenities of its VIP rooms,” adding that “this type of market share gain is sustainable”.

On October 11 Union Gaming said it was revising upward its estimates for third-quarter 2019 earnings at Universal Entertainment, due to good numbers from Okada Manila.

The same day the Japanese group had reported that the first nine months of 2019, casino revenue at Okada Manila rose by 46.2 percent year-on-year, with VIP rolling chip volume up 33.5 percent, to nearly PHP402.65 billion (US$7.87 billion).

Mr DeCree’s Tuesday note said that in the brokerage’s view, “Okada Manila’s independence from any Macau VIP operations has also been a key competitive advantage”. The memo did not give further detail on that point.

Union Gaming’s Tuesday commentary suggested the management at Okada Manila had “made strides” in its electronic gaming machine business.

“We attribute some of the success to recent updates to the loyalty programme and slot floor management. We believe there is much more to come on this front and see slots as a notable area of growth potential over the next 12-plus months,” stated Mr DeCree.

On October 11 Universal Entertainment had reported that gaming machine handle at Okada Manila had risen 33.2 percent year-on-year for the first nine months of 2019, to nearly PHP114.26 billion.

Some Macau casinos visited by GGRAsia on Thursday, actually had tables that were closed, notwithstanding strong consumer demand during Chinese New Year (CNY). The reasons for some tables being... END_OF_DOCUMENT_TOKEN_TO_BE_REPLACED