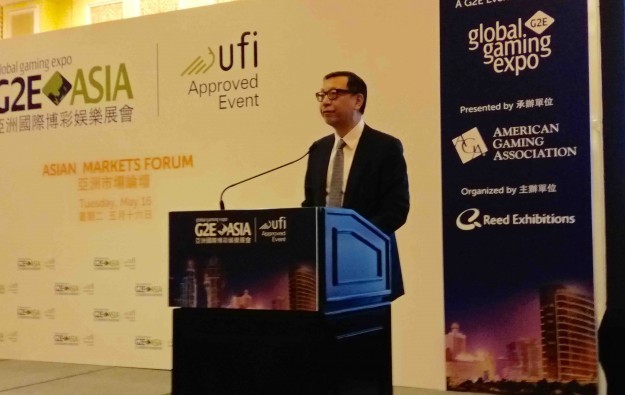 He also urged the Macau government to be prepared to revisit the issue of Macau’s 39 percent gaming tax, in the light of what he said was strong regional competition from lower-tax jurisdictions targeting the “highly mobile” Chinese customer.

Mr Lui’s comments came during his keynote address at the start of the Global Gaming Expo (G2E) Asia 2017 at the Venetian Macao resort hotel on Tuesday.

The executive also said the Macau operators were committed to a transparent and well regulated industry, which he said was in the interests of the operators as well as the government.

“We encourage the idea that Hengqin implement a borderless entry between Macau and the island, so that all visitors to Macau can also access the amenities that Hengqin has to offer, and then freely return to Macau,” said Mr Lui.

Hengqin – a 100-square kilometre (41.1 sq miles) island that is administratively part of mainland China – is next door to Macau and already offers a theme park, with more amenities planned. But visitors between the two places must currently pass immigration checkpoints to travel back and forth.

Galaxy Entertainment plans to develop a non-gaming project on Hengqin.

Mr Lui said regarding relaxation of border controls between Hengqin and Macau: “This would make Macau a more competitive and compelling family destination. Put it like this: Macau, the world’s biggest gaming hub, with Hengqin and its entertainment focus, would be like having Las Vegas and Orlando right next to each other, instead of over 2,000 miles apart.”

That was a reference latterly to the Florida city in the United States that is home to a number of family theme parks including Disney World and the Epcot Center.

Mr Lui said the occasion of his keynote address was “not the right time” to discuss Macau’s gaming tax regime.

But he noted: “We need to keep in mind there are lower-tax jurisdictions actively targeting the highly-mobile Chinese gamblers. At some point in time, depending on the prevailing conditions, there may be a need for all the stakeholders – including the community, the Legislative Assembly, the government and the concessionaires – to have an open and honest discussion on how to ensure long-term competitiveness.”

He said that in hindsight, Macau had been “much too dependent on VIP”.

The executive noted: “We fully understand the central government’s concerns regarding capital flight. If it is perceived that money is being washed through Macau, it might lead to the tightening of visa restrictions. We need to clearly demonstrate to the central government that we support responsible gaming with full reporting and transparency.”

Mr Lui was asked by GGRAsia during a short question and answer session at the end of his speech about the issue of telephone use at gaming tables in Macau VIP rooms. The local regulator, the Gaming Inspection and Coordination Bureau, banned use of telephones at the table in an order issued in May last year.

The executive stated: “Rome was not built in one day. Macau has already come a long way since Day One [market liberalisation]. It [telephone betting] is not going to go away immediately because of the high gaming tax we have in Macau. I think the government and the operators are doing their best to make sure there will be more transparency and more regulations controlling proxy betting.”

In a further follow up with GGRAsia, it was said that Mr Lui was referring to proxy betting occurring in other jurisdictions that happen to have lower taxation than Macau.

Mr Lui was also asked for his thoughts about the nascent Japanese casino market. He stated: “It is the third-biggest economy in the world. Japan’s population has the capacity of enjoying games such as pachinko and slot machines… horse racing… as forms of entertainment. So I believe that casino is going to be very, very welcome by the people there.”

He added: “Right now all the international operators are showing very keen interest in the market, and so are we at Galaxy [Entertainment]. But since the terms of engagement – the details – have not been released yet, we need to be a little bit more patient…”

A Chinese Foreign Ministry senior official said on Wednesday that the United States’ move to label casino entrepreneur Steve Wynn as an “agent” of China, was “based on nothing but hearsay... END_OF_DOCUMENT_TOKEN_TO_BE_REPLACED