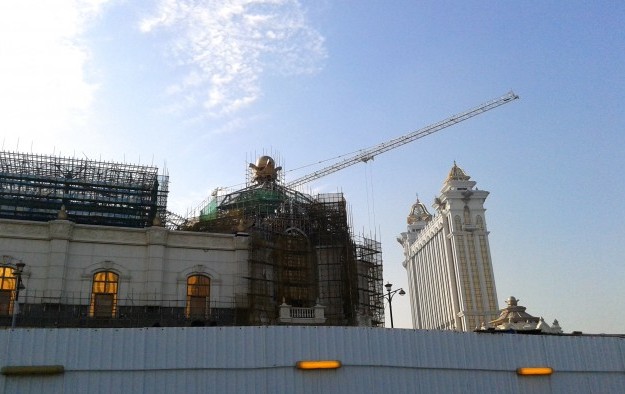 Nasdaq-listed Melco Crown Entertainment Ltd on Friday applied to have its dual Hong Kong listing removed from that city’s bourse. Last month, Melco Crown was dropped from the benchmark Nasdaq Q-50 Index due to its poor stock performance.

But Morgan Stanley’s latest report cites favourable factors for Macau gaming shares in 2015. They include a likely sequential improvement in gross gaming revenue (GGR) coming off a more moderate base than previously, and attractive free cash flow (FCF) yield; as well as the likely market boost from the opening this year of Galaxy Entertainment Group Ltd’s Galaxy Macau Phase 2 (pictured) and of Melco Crown Entertainment Ltd’s majority-owned Studio City.

Morgan Stanley thinks that mass revenue – which according last week to a Credit Suisse AG estimate took a hammering in December on the back of China’s continued anti-corruption campaign – is likely to be flat in 2015, with a 9 percent decline in the first half and 11 percent expansion in the second half.

The Morgan Stanley paper acknowledges that margin pressure linked to issues including rising labour costs and possibly even some labour-related delays could take some of the shine off the new Macau openings. But the research house still likes the free cash flow story from the local industry.

They added: “…we expect sequential improvement in GGR, driven by a lower base and the opening of Galaxy Macau Phase 2, and Studio City to result in positive industry growth. Wynn [Macau Ltd] and SJM [Holdings Ltd] also plan to add 40 and 10 new tables, respectively, in 2015.”

The report says that cuts in dividends paid by casino names are possible. It cites its own research indicating the local sector’s net cash position is falling, and as of the end of the third quarter 2014 was around 40 percent down compared to end-2013.

But it adds that dividend yield – even based on consensus estimates for the industry – would for the first time lag total free cash flow yield, a figure that factors current capital expenditure on development.

“Price multiples have reached two-year lows and are one standard deviation below long-term averages based on consensus estimates,” adds the report in a commentary on the Macau-based stocks.

It adds: “While our earnings estimates remain below consensus, we see upside to valuations based on 8 percent FCF yield and 5 percent dividend yield.”

China has moved one step closer towards reopening, by relaxing some its Covid-19 control measures, with most infected people now able to quarantine at home rather than in state-sanctioned... END_OF_DOCUMENT_TOKEN_TO_BE_REPLACED