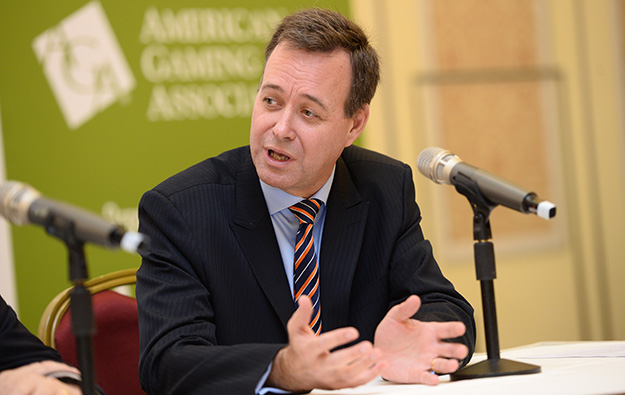 Trevor Croker (pictured), Aristocrat’s executive vice president for global products, has been appointed as CEO-elect, effective from March 1, 2017, subject to the receipt of any necessary regulatory approvals.

“An orderly transition process is under way, with Trevor preparing to relocate to North America – our single largest market and source of strategic opportunities – in the new calendar year,” said a message from Mr Odell and Ian Blackburne, Aristocrat’s chairman, that was included in the company’s annual report filed with the Australian Securities Exchange.

“The response to Trevor’s appointment from shareholders, customers and staff has been very positive,” the executives stated.

They added: “The appointment of a highly regarded internal leader to succeed Jamie underlines both the quality of Aristocrat’s executive ranks and the importance the board places in ensuring appropriate continuity in terms of strategy, momentum and culture, in the interests of shareholders and other key stakeholders.”

Mr Blackburne and Mr Odell also said that the company’s board would continue to implement in an orderly way the renewal of its ranks. “Renewal will continue for a further year or two as the board prepares for retirements of its longer serving directors,” they stated.

Bloomberry Resorts Corp wants to build a third casino resort on the Philippines’ main island, Luzon. It would be at Paniman, a coastal community in Cavite, about 66 kilometres (41 miles) southwest... END_OF_DOCUMENT_TOKEN_TO_BE_REPLACED