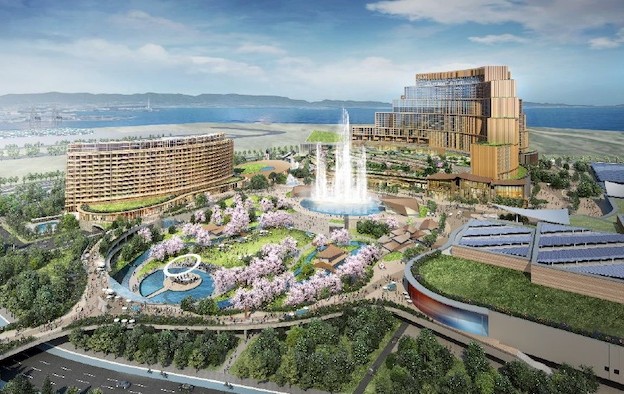 The Osaka prefectural government released on Tuesday details of the winning request-for-proposal (RFP) submission from the MGM Resorts International and Orix Corp consortium, for a casino complex – or integrated resort (IR) – in that Japanese city.

The information was provided as Osaka prefecture’s governor, Hirofumi Yoshimura, made official the metropolis’ RFP result.

The project (pictured in an artist’s rendering) is being referred to as “WOW next to the Kansai and Osaka region”. The development concept is described in the materials as: “The water city to connect people and things as a transport hub”.

The initial investment amount for the complex is confirmed at JPY1.08 trillion, i.e., about US$9.7 billion, slightly above a figure previously mentioned. The resort, to be located on Yumeshima island, in Osaka Bay, would provide employment for 15,000.

The consortium expects 20.5 million visits annually to the property: 14 million domestic-customer visits, and 6.5 million visits by people from overseas. From the casino entry fee to be imposed on domestic players, Osaka prefecture and city in total would get JPY33 billion annually, it was forecast.

In late July, the Osaka authorities mentioned the likelihood of an initial opening for the IR to be at some point from 2028 at the earliest, to 2030.

Bill Hornbuckle, chief executive and president of MGM Resorts, said in a statement issued on Tuesday after the announcement: “We will work closely with the prefectural/city municipal governments to deliver an iconic, uniquely Japanese destination warranting Osaka’s selection as home to one of Japan’s first integrated resorts.”

Other information released on Tuesday included that the resort’s accommodation would consist of an MGM Osaka hotel; MGM Villas; and a Musubi Hotel; the properties offering in aggregate 2,500 total guest rooms.

Meetings and conference space would cover approximately 400,000 square feet (37,161 sq. metres) capable of accommodating more than 6,000 visitors. In addition, there will be approximately 330,000 sq ft of exhibition space, including an “Innovation Laboratory”; and a Yumeshima Theater, with circa 3,500 seats.

The scheme would also “support and facilitate the formation of a ‘Showcase of Japanese Tourism’ plan” for the area surrounding the resort, in order to “establish Osaka as a gateway for wider tourism in Japan,” said MGM Resorts in its press release.

Macau recorded 965 “gaming-related” crimes in full-year 2022, down 29.7 percent on the 1,372 identified in the previous year, according to the latest statistics published on Tuesday by... END_OF_DOCUMENT_TOKEN_TO_BE_REPLACED