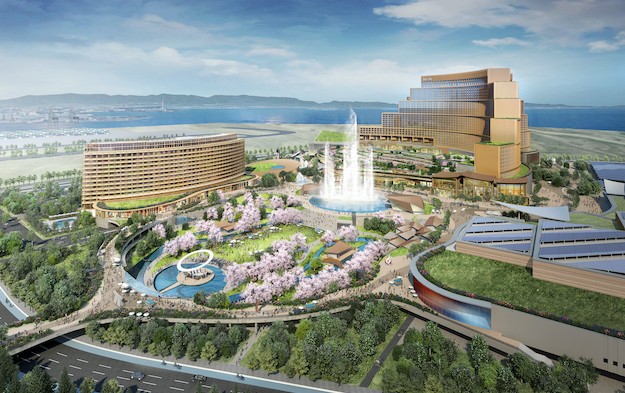 Osaka’s draft District Development Plan regarding a casino resort (pictured in an artist’s rendering) in that Japanese metropolis has set the target opening date for such a facility around the autumn or winter of 2029, according to the document published on Tuesday.

In late July, the Osaka authorities disclosed that an initial opening for an integrated resort (IR) would probably be 2028 at the earliest, running up to 2030.

The draft District Development Plan was disclosed at a joint meeting on Tuesday of the Osaka prefectural and Osaka city governments.

It confirmed that United States-based casino group MGM Resorts International and its main consortium partner Orix Corp would each have a 40 percent equity stake in the scheme. About 20 Osaka firms – including railway operators Kintetsu Group Holdings Co Ltd, and Hankyu-Hanshin Holdings Inc – would hold a combined 20 percent stake.

The initial investment amount for the complex was confirmed at JPY1.08 trillion, i.e., about US$9.5 billion. Such investment comprises JPY530 billion from the companies involved in the project, with MGM Resorts and Orix each investing 40 percent of that amount, while the minority shareholders would fork out the remaining 20 percent.

The aggregate investment also involves bank financing of JPY550 billion, according to the draft. The document said that the consortium obtained for that financing, a commitment letter from MUFG Bank Ltd, described as the largest bank in Japan, and Sumitomo Mitsui Banking Corp.

According to the draft plan, the business licence would be valid for 35 years, with the possibility of being extended for a further 30 years. The resort, to be located on Yumeshima island, in Osaka Bay, would provide employment for 15,000.

The Japanese government opened on October 1 the application period for local authorities to pitch as host for a casino resort in that nation, and announced the weighting it will give when scoring such requests.

Under the liberalisation programme, up to three resorts will be permitted nationally in a first phase. Currently, only three local communities are in the running for hosting a large-scale IR. They are: Osaka, Nagasaki, and Wakayama.

Most of Macau’s casino operators are likely to generate positive free cash flow in the first quarter, given the robust recovery level of mass-market gross gaming revenue (GGR) in January, relative... END_OF_DOCUMENT_TOKEN_TO_BE_REPLACED