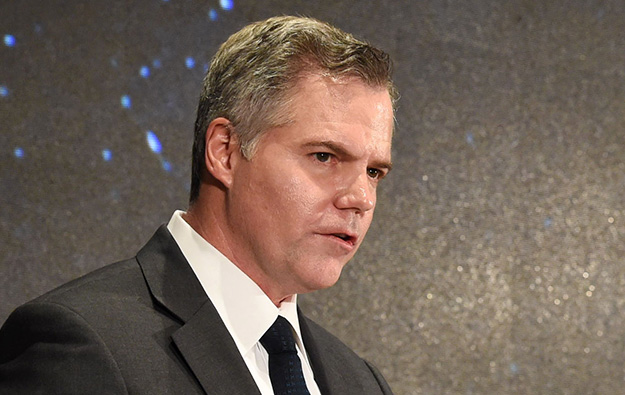 The Japanese city and surrounding prefecture of Osaka are likely to make a decision on their development partners for a tilt at a casino resort by “this time next year”, said Jim Murren (pictured in a file photo), chairman and chief executive of casino firm MGM Resorts International.

“We’re going to know probably in the next three or four months what the timing is going to be for Osaka,” he told Bloomberg Television in an interview recorded in Japan and loaded to the Bloomberg news website on Thursday.

Mr Murren added, referring to a stage of bidding known as “request for proposal” (RFP): “The city government will present an RFP. It will be very competitive. MGM is going to be one of the bidders for that RFP, and I think they will make a decision [on preferred partners] about this time next year.”

The head of the United States-based parent group reiterated its strategy – mentioned in February – of focusing on Osaka for its Japan casino push, although Mr Murren also acknowledged it was likely to involve MGM Resorts being part of a consortium, rather than as an independent suitor.

Mr Murren stated: “We made the decision to focus all our energy on Osaka… We believe Osaka is going to be the first integrated resort location” in Japan.

“The government’s very excited about it,” he added.

“They won the World Expo just recently. It’s going to happen in 2025,” Mr Murren stated, referring to a major global event to be held in the Japanese port city, the country’s third-largest by population.

The MGM Resorts chairman further stated, referring to an artificial island within the Osaka city boundary that has been identified as a likely location for a casino resort as well as for the World Expo: “The government is very anxious to get the whole Yumeshima site in Osaka developed as soon as possible in connection with that World Expo.”

In the extract broadcast on Bloomberg TV, there was no mention by Mr Murren of the fact that there is a poll on April 7 that could potentially see a change of leadership in Osaka prefecture and city from the hands of the Osaka Restoration Association – a localist movement with strong backing for a casino – to those of the Liberal Democratic Party (LDP). The LDP holds the balance of power at national government level, but has a more nuanced approach to the national casino policy, according to Japanese media reports and commentary.

After Osaka chooses development partners for a casino resort, it will still have to apply to the national government for the right to host such a facility. Up to three casino resorts will be allowed in the first phase of market liberalisation.

Mr Murren stated, regarding Osaka’s prospects: “I am confident Osaka is going to be one of the three. We are working really hard for MGM to be the IR [integrated resort] operator in Osaka. All we can do is work as hard as we can, meet with Japanese companies, form a Japanese consortium: we are trying to outwork our competitors a little bit.”

The MGM Resorts chairman also gave some commentary on its partnership – announced in November during the baseball off-season in North America – with elite sports body Major League Baseball (MLB). He described baseball as a “bridge” between East and West. The sport is highly popular in Japan, with a number of Japanese players having successfully crossed over to the MLB. The Seattle Mariners and the Oakland Athletics – two MLB teams – played their 2019 season opener in Tokyo on Wednesday.

Mr Murren said that aside from baseball, MGM Resorts had “deep” links to sports, including other major North American professional codes.

He noted the current MLB deal was for four years and “will probably go on beyond that”.

He stated: “We are sharing data together. We are looking at how to promote the sport of baseball not only in the United States, but around the world.”

The executive added: “Japan loves baseball. We’re in the entertainment business. Baseball is a common bridge between the two countries, and we couldn’t be happier to be a part of this.”

Slot-machine maker and game-content provider Aristocrat Leisure Ltd says it has completed the acquisition of Roxor Gaming Ltd, a game developing company based in London, in the United Kingdom. The... END_OF_DOCUMENT_TOKEN_TO_BE_REPLACED