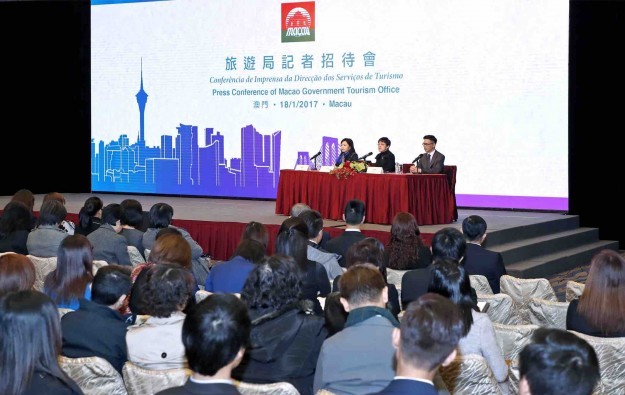 Visitor arrivals to Macau increased 0.8 percent year-on-year to 30.95 million in 2016, with the aggregate annual number of overnight visitors exceeding same-day visitors for the first time in 10 years, said the Macao Government Tourism Office (MGTO) at a press conference on Wednesday.

According to the preliminary data, close to 28 million – or approximately 90 percent – of visitors of all types came from the Greater China market, namely mainland China, Hong Kong and Taiwan, a slight year-on-year increase of 0.1 percent. Macau welcomed more than 20 million visitors from mainland China last year, with approximately 44 percent of them coming from Guangdong province.

International visitor arrivals rose by 7.9 percent. South Korea continues to rank first as a source market, contributing more than 660,000 visitors to Macau last year, up by nearly 20 percent, said the city’s tourism office. There was a 4.6-percent growth in the number of visitors from the United States, the only long-haul source market in the top ten.

Brokerage Sanford C. Bernstein Ltd had said in previous commentary that the growth trend in overnight visitors is positive for Macau’s casino industry, as these tourists “were considered more valuable to Macau compared with day trippers”.

Despite the increase in the number of visitors, Macau’s tourist price index, which reflects the price change of goods and services purchased by visitors, fell by 5.4 percent year-on-year in 2016, data from the city’s Statistics and Census Service show. The decrease was mainly attributable to lower hotel room prices, down 21.2 percent year-on-year, the statistics bureau said on January 13.

Commenting on the price index, analysts at Sanford Bernstein said they see “price pressure on mid-week accommodations as casinos and hotels try to lure visitors in off-peak periods following the continued increase in room supply in Macau”.

“However, for the casino operators, weak mid-week hotel room rates are being offset by rebounding growth in gaming revenues,” said analysts Vitaly Umansky, Zhen Gong and Yang Xie in a note on Tuesday.

Macau had a total of 113 hotel establishments supplying an aggregate of 37,634 rooms at the end of 2016, up by 14 percent from the previous year.

On Wednesday, Ms Senna Fernandes said MGTO would complete this year the formulation of the “Macao Tourism Industry Development Master Plan”. The plan will cover an array of topics including tourism products, destination marketing and tourism carrying capacity.

The decision by the Macau government to grant fresh 10-year licences to each of the city’s six incumbent casino operators has been welcome by top management at those firms. Each of the concessions... END_OF_DOCUMENT_TOKEN_TO_BE_REPLACED