Oz watchdog growls at Aquis on takeover of rival casino 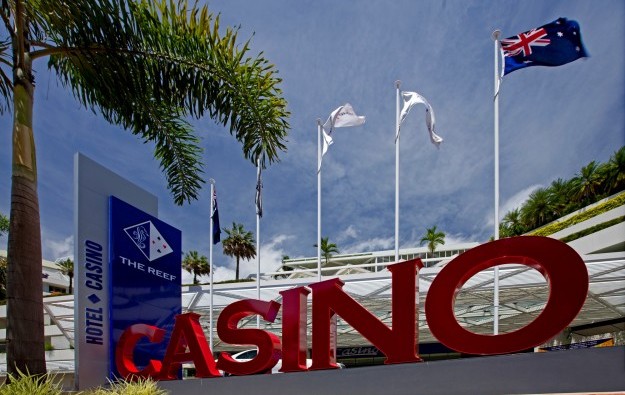 The Australian Competition and Consumer Commission (ACCC) said on Thursday it was concerned about harm to the public interest if a Hong Kong-based developer were allowed to take over a casino in Cairns, Queensland, while at the same time building a 750-table casino resort on the outskirts of the city.

Aquis Reef Holdings (Aus) Pty Ltd wants to acquire the Reef Hotel Casino (pictured), a Cairns property currently focused on mass-market customers, in exchange for A$216.86 million (US$203.20 million). At the same time Aquis is seeking approval to build a 7,500-room casino resort costing A$8.15 billion in two phases at nearby Yorkeys Knob.

An entity called Aquis Resort at The Great Barrier Reef Pty Ltd – the proponent of the Aquis resort – is wholly and solely owned by Tony Fung, a Hong Kong resident and “long term investor in Queensland” according to a submission the developer made to the state government in July 2013.

Up to three new casino licences are on offer in Queensland, one of them for Queen’s Wharf in the state capital Brisbane. The state is expected to announce its decision on all bids next year.

The federal competition commission said in a statement on Thursday regarding Aquis’ plans: “The proposed acquisition [of Reef Casino] has the potential to reduce the number of casino owners in Cairns from two to one, removing potential competition between the Reef Casino and the Aquis Resort.”

But the commission added: “Aquis has submitted to the ACCC that if the proposed acquisition [of Reef Casino] did not proceed and if the Aquis Resort was developed, the two casinos would not compete with each other for mass customers in a material way.”

But the commission said the fact Aquis had applied for permission for 1,500 gaming machines as well as 750 tables raised other concerns.

“Even if the final resort as constructed does not include as many tables and machines as this, it will still be around the scale of the largest existing casinos in Australia. The ACCC is considering whether: a) the Aquis Resort would be able to attract enough customers to operate a casino on such a large scale without appealing to all types of mass customers; b) the large number of gaming machines would be necessary if Aquis did not intend to attract lower stake mass customers.”

Even if the commission were minded to recommend that Mr Fung not be allowed to take over Reef Hotel Casino at the same time as seeking to build Aquis Resort, it is not clear whether the decision would be binding on either the state or federal government.

Australia’s central government, formed by the Liberal Party, pledged a “root and branch” review of competition policy as part of its 2013 election campaign.

The review’s draft terms of reference state: “A modern competition policy should provide a framework with the right incentives and enabling provisions that fosters vigorous and healthy competitive processes, allowing Australia to take advantage of the opportunities an increasingly global marketplace provides.”

Queensland’s state government, also formed by the Liberal Party, is currently the nation’s most indebted regional government. According to its 2014-15 budget, it owes A$80 billion, with a A$4 billion annual interest bill.

It is looking to issue casino licences and boost tax revenues from gambling as part of its efforts to balance its books. Australian Securities Exchange Ltd-listed Echo Entertainment Group Ltd already operates the Treasury Casino & Hotel Brisbane, and the Jupiters Hotel & Casino Gold Coast. Echo in January agreed to sell its Jupiters Townsville property to Colonial Leisure Group Pty Ltd for A$70 million.

Another investor called ASF Consortium Pty Ltd, led by an ASX-listed Sino-Australian company called ASF Group, made a bid with the Queensland government in February for a A$7.5 billion casino resort at Broadwater on Queensland’s Gold Coast. The project was shortlisted for consideration in May.

Queensland’s inward investment drive coincides with a period of increasing competition in the Macau gaming industry.

Investors in Macau junket rooms are currently pursuing casino investments in a range of offshore locations, including Saipan and Vanuatu in the Pacific.

Macau casino operator MGM China Holdings Ltd had a “record” market share in January, and its venues were the “highest-earning businesses” in the portfolio of the majority owner MGM Resorts... END_OF_DOCUMENT_TOKEN_TO_BE_REPLACED