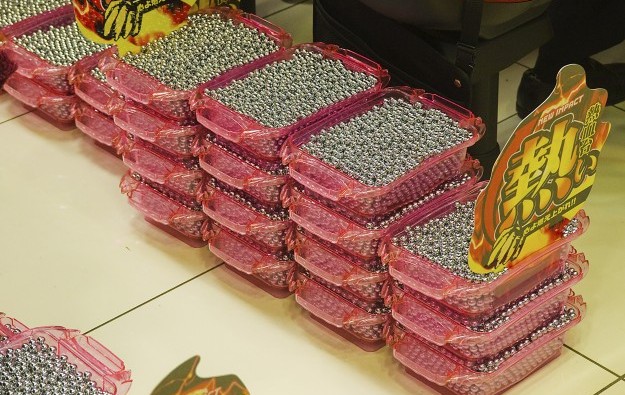 The Japanese company first agreed a non-binding memorandum of understanding with Macau Legend – led by former Macau legislator David Chow Kam Fai and running several casino and hotel operations in the territory – on August 23, 2013. That was extended in February this year for six months, and has now been rolled on to a new deadline of February 23, 2015.

Dynam Japan – a manager in the pachinko hall industry (pictured) in Japan – has already invested approximately US$85 million in Macau Legend, including an initial purchase of US$35-million worth of shares following the latter’s global public offering in Hong Kong in July last year.

In early June this year, Dynam Japan said in a filing to the Hong Kong Stock Exchange that it was waiting for the Macau government to approve its application to operate in the city what it referred to as “next generation pachinko machines”.

Then in early August, an analyst from Tokyo-based investment advisor Fisco Ltd suggested Dynam Japan might seek to be an investor in a regional casino resort in Japan were such venues to be legalised by the government. The report added it was unlikely that Dynam would seek to be involved – even as a member of a consortium – in one of the two big-city licences likely to be on offer in Japan. With those mooted projects, foreign investors have mentioned possible capital costs of as much as US$10 billion for a single resort.

Dynam Japan in late July said that total revenue from its existing operations for the financial quarter ended June 30 decreased by approximately 4.8 percent year-on-year to JPY38.2 billion (US$375 million).

Macau Legend said on Wednesday in a Hong Kong filing that the structure of the first of three new hotels it is building at Macau Fisherman’s Wharf will be “substantially completed” in the third quarter of 2014, with the opening “tentatively scheduled” for the fourth quarter.

But that property – the Harbourview Hotel – will not house a casino. The property will be connected to Macau Legend’s existing Babylon Casino by a “skywalk” bridge, a person working for the company, who requested not to be named, told GGRAsia in June.

The decision by the Macau government to grant fresh 10-year licences to each of the city’s six incumbent casino operators has been welcome by top management at those firms. Each of the concessions... END_OF_DOCUMENT_TOKEN_TO_BE_REPLACED