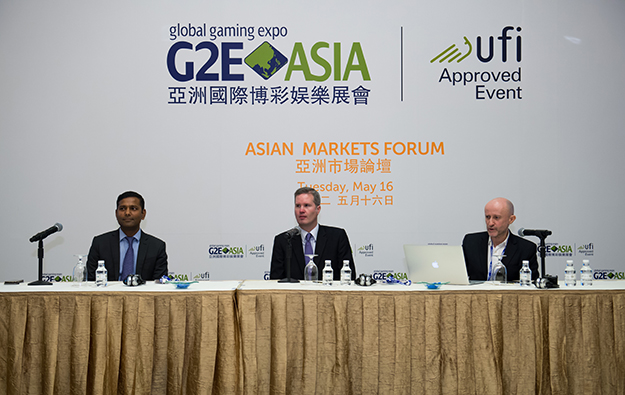 The huge amounts of money wagered on pachinko games annually in Japan do give some pointers to the likely appeal of casino slot machines when casino resorts are built there.

So said the investment analysts on a panel – at Global Gaming Expo (G2E) Asia on Tuesday – discussing the potential for Japan and other Asia Pacific casino markets, though they cautioned that a pachinko player was not necessarily a casino slot player. The panel was moderated by GGRAsia.

A total of JPY23.2 trillion (US$204 billion) was wagered on pachinko in Japan in 2016 according to data from the Japan Productivity Centre. That equated to about US$30 billion in gross gaming revenue (GGR) in 2016 – slightly more than Macau’s casino GGR of US$27.8 billion that year, said Mr Govertsen.

“Last year, Japan’s pachinko industry was the equivalent of Macau in terms of GGR – that’s a mind-boggling statistic… It does speak to the propensity [in Japan] to gamble. The interesting thing though is that the typical pachinko customer tends to be middle class and below, rather than middle class and above. So there’s plenty of GGR on the sidelines that’s unharvested as it relates to pachinko.”

He added: “When you get down to thinking about the IR [integrated resort] opportunity, whether it’s two big ones – or two big ones and several small ones – it’s going to be a significant number. A lot is going to depend of course on what are the rules and regulations – tax rates, [rules on] junkets, etc. But I think the pachinko industry by itself suggests that Japan should be a massive gaming market.”

Mr Choudhary said that, based on conversations with Japanese lawmakers, it was possible that those pachinko game makers that also produce pachislot machines – devices something of a hybrid in appearance between pachinko and casino video slot machines – might be involved in IR bids.

“When I had conversations with Diet members [lawmakers] I did say to them ‘Do you think you will get fierce opposition from pachinko parlours and manufacturers when you get these integrated resorts, because they [the IRs] will be eating their lunch so-to-speak?’” said Mr Choudhary.

“And one of the answers was that these guys that were actually making these machines – pachislot machines – will be allowed to participate in integrated resorts,” added the Morgan Stanley analyst.

“I think they [the Japanese] will learn about it as they go along, and tweak the number of tables and slot machines [in the integrated resorts],” stated Mr Choudhary.

Mr Govertsen said there was a possibility the Japanese might require a minimum amount of Japanese gaming machine equipment on Japanese casino floors.

“I wouldn’t be surprised if we see some ‘buy local’ mandates,” stated the Union Gaming analyst.

“If you look at Universal [Entertainment Corp] and Aruze [Gaming Inc] they are makers of traditional slot machines that you can see on the casino floors here [in Macau]. Could we see a mandate where 40 percent of the electronic gaming floor in Japan is Japan made? Sure, why not?” said Mr Govertsen.

Morgan Stanley had said in a Sunday report on Japan that it expected the tax regime for casino business in that country to be “closer to Singapore and Las Vegas” than Macau, with a relatively low gaming tax rate but income taxes that could then be redistributed more broadly to support Japan’s economy.

The panellists also commented on the topic of the refreshment of gaming rights for the current Macau operators. The current licences are due to expire on various dates between 2020 and 2022.

Union Gaming’s Mr Govertsen said it would in likelihood take “a few years” before there was a clearer indication from the Macau government on how it will be handled.

“I think the bottom line is look for movement from the government post-2019,” said Mr Govertsen.

Mr Choudhary stated he did not expect more concessionaires to be added to the Macau market, given that the existing model has worked successfully, with “enough competition and enough cooperation” amongst the six Macau concessionaires.

The imminent return of package tours from mainland China will not only help boost Macau’s tourism businesses, but is also expected to help casinos gain more foot traffic in their mass gaming... END_OF_DOCUMENT_TOKEN_TO_BE_REPLACED