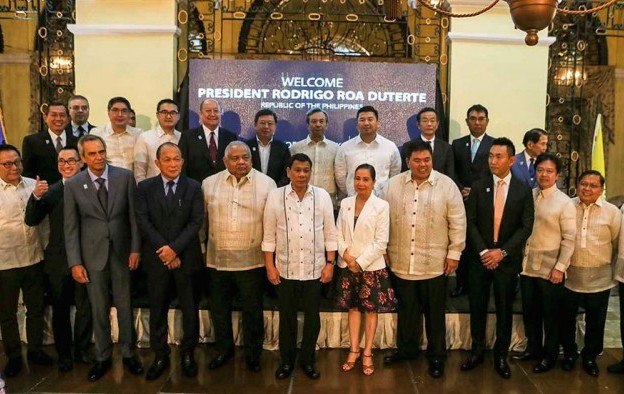 Gross revenues directly accruing to the Philippine gaming regulator were close to PHP60 billion (US$1.19 billion) in 2017, said its chairman Andrea Domingo.

The remarks were carried on the website of the Philippine Amusement and Gaming Corp (Pagcor) on Friday, following an event the previous day for Pagcor’s licensees.

“In 2017, Pagcor posted close to PHP60 billion in gross revenues,” stated Ms Domingo (pictured 7th from left, front row at the event). That was a 9 percent increase in year-on-year terms.

In November, the Pagcor boss had estimated the agency’s 2017 revenues would be approximately PHP61 billion, up 11 percent on the PHP55-billion figure recorded for 2016.

Friday’s statement from Ms Domingo said that of the nearly PHP60 billion recorded for 2017, “the biggest portion” – P22.44 billion – came from Pagcor-operated casinos.

“It was followed by the PHP19.27 billion income from licensed casinos’ fees; PHP9.45 billion from traditional bingo and e-Bingo licensees; PHP5.50 billion from Pagcor’s share from other gaming licensees such as e-Games, poker, junket operations, among others; and PHP3.14 billion from offshore gaming operations,” she explained.

The reference to “licensed casinos” related to private-sector venues including those in the Entertainment City zone in the capital Manila, that rely on a permit from Pagcor. The large private-sector venues combined, produce the majority of the Philippine casino industry’s gross gaming revenue (GGR) – a different measure from the Pagcor “revenues” mentioned by Ms Domingo.

According to the Pagcor release, the President gave a speech praising the local gaming industry for contributions to the economy.

“I can give you the assurance that we welcome you. I thank you for the income that we are earning from the gaming industry,” he said.

Mr Duterte added however that the sector must “avoid graft and corruption whether you are the giver or the receiver.”

Registration and reporting guidelines for casinos and other financial service businesses in relation to anti-money laundering and prevention of terrorism financing came into effect in the Philippines on January 4.

Macau’s casino gross gaming revenue (GGR) for the first five days of February is estimated at MOP1.9 billion (US$235.1 million) – or MOP380 million per day – a level that suggests a “45... END_OF_DOCUMENT_TOKEN_TO_BE_REPLACED