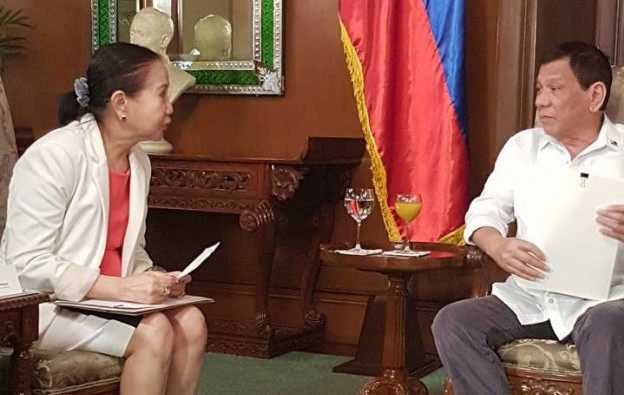 The state-run Philippine Amusement and Gaming Corp (Pagcor) said it remitted last week PHP5 billion (US$96.9 million) for the government’s Socio-Civic Projects Fund, to support social and economic development projects. The funds were remitted to the office of the country’s President, stated on Saturday the country’s gaming regulator in a press release.

The head of the Philippine gaming regulator, Andrea Domingo (pictured left), met President Rodrigo Duterte (pictured right) at his official residence on October 25, according to the release.

The gaming regulator said it has contributed an aggregate of PHP11.5 billion to the Socio-Civic Projects Fund since 2016.

Pagcor, an operator of publicly-owned casinos as well as the regulator for the country’s entire casino industry, is required by law to pass at least 50 percent of its annual gross earnings to the government’s treasury bureau. The state-run company is also required to pay gaming taxes and contributions to support social and economic development projects.

Pagcor reported net income of PHP3.06 billion for the first six months of 2017, up by 24.9 percent from the prior-year period. The regulator paid out a total of PHP14.84 billion in gaming taxes and contributions from the first half revenue, including nearly PHP13.40 billion directly transferred to the Bureau of the Treasury.