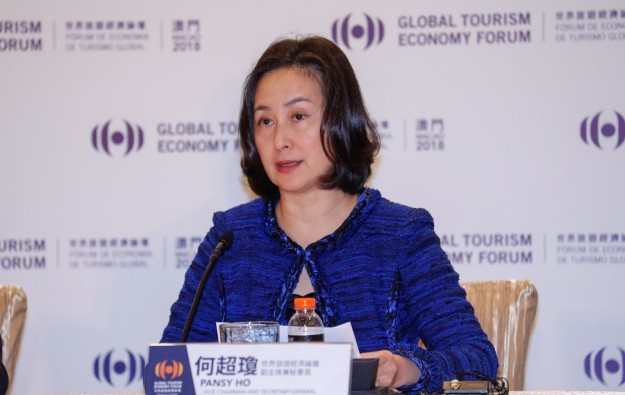 Pansy Ho Chiu King (pictured), co-chairperson and executive director at Macau casino operator MGM China Holdings Ltd, said on Monday she was confident about the outlook for the city’s gaming and hospitality industry despite macroeconomic uncertainty in China and Chinese consumer concerns about the United States-China trade war.

“I think we are very confident. In fact, we have been, luckily, already going on the right track,” remarked Ms Ho on Monday. She was referring to efforts of Macau’s casino operators in terms of developing the city’s non-gaming tourism offerings.

Ms Ho was speaking on the sidelines of a press conference about the Global Tourism Economy Forum 2018 due to be held in Macau later this month. The annual event is supported by the Macau government and Ms Ho helps to organise the gathering.

She said, referring to the Macau tourism market: “I am not seeing any pressure, by the way, from any government units – whether they are from the [China’s] central government – [or local], that basically discourage mainland Chinese visitation to Macau. Quite the contrary, I think, all in all it’s been very consistent…”

Ms Ho added: “It has already been notable that for the past decade the central government has wished [for us] in Macau to really transform ourselves into not just [a place] perceived as a gaming destination… I believe, we all have done a very good job in demonstrating our capabilities.”

She further noted: “We are building the non-gaming facilities to international standard. At times, I would say, a lot of people when they come, they marvel at the achievements of all of these efforts from the gaming concessions.”

The MGM China executive director declined to comment on whether the firm was already in talks with the Macau government over possible short-term extension of the firm’s current Macau gaming rights. They are due to expire in 2020, but local gaming law allows for short-term extensions – up to a maximum of five years – before a fresh public tender process is required.

Ambrose So Shu Fai, chief executive at rival operator SJM Holdings Ltd, mentioned in June that his firm was interested in a two-year extension for its Macau gaming concession prior to its scheduled expiry in 2020. MGM China’s Macau gaming permit technically stems from a sub-concession spun off from the rights of SJM Holdings.

Regarding the Macau gaming concession situation, Ms Ho remarked only: “We believe that it is conducive and beneficial for Macau as we are going through this transformational period…and this is not just specific and pertaining to one or two concessions – it is that all of us are really working towards basically positioning ourselves… so that we can make Macau a destination for non-gamers.”

Ms Ho added: “I would hope that eventually we, all the basically American operators, would be able to again, demonstrate that we have basically operated as a local organisation here.”

She noted: “We are really using the local know-how and we are all working towards building a better Macau and therefore, we should earn the trust and confidence [of the local authorities].”

U.S.-based MGM Resorts International is the parent of MGM China.